From the beginning of the pandemic until the beginning of March of this year, the Berlin police provided exactly 932,554 emergency personnel hours “to enforce the SARS-CoV-2 infection protection ordinance”. The interior administration named this number in a previously unpublished answer to a question from AfD MP Karsten Woldeit. The answer is at the Tagesspiegel.

Each of the 17,000 Berlin police officers spent almost exactly seven working days of eight hours each exclusively with corona checks. For comparison: May 1st uses around 100,000 hours.

This magnitude was previously completely unknown. When the cold snap in February, for example, there were mass parties on the ice of the Landwehr Canal in Kreuzberg, at which the police were also on duty by helicopter. After this large-scale operation, the AfD MP Woldeit made his request about corona parties.

But apart from the extent of the police operation, the Senate knows almost nothing. The police do not record illegal corona parties in statistics, as Interior Secretary Torsten Akmann wrote. The administrative offenses punished by the police according to the Infection Protection Measures Ordinance are only “transmitted to the locally responsible district offices for processing”.

The districts were asked by the Senate to provide their data. Ten districts answered, Charlottenburg-Wilmersdorf and Spandau not. Eight of the ten districts gave this answer: “No answer”. The background is apparently a gap in the computer programs used.

After all, two districts made the effort to carry out a so-called “manual evaluation”, namely Marzahn-Hellersdorf and Reinickendorf. This manual counting of files resulted in 486 offenses in Marzahn-Hellersdorf and 80 in Reinickendorf on “illegal parties or gatherings in public green spaces or parks” from the beginning of the pandemic until the beginning of March this year.

A great many of these ads were posted and not followed up. Of the 240 advertisements in Marzahn-Hellersdorf that have already been completed, 73 have been posted. 52 ended with a warning, 115 with a fine.

In Reinickendorf, 28 of these reports were finally processed: 15 discontinuations, 13 fines. Pankow was the third district to report that eight complaints had fined 9,000 euros, but were only partially collected. Four celebrants contradicted the modesty. Otherwise: “No answer.”

A lot of effort, little knowledge

The MP Karsten Woldeit commented: “It is astonishing that the districts cannot provide any data.” For the AfD politician, “an important basis for the previous lockdown policy is no longer applicable.” It is pointless to “repeatedly withdraw police forces to comply with the Corona rules” if there are “almost zero findings about violations” afterwards.

The size of the Corona parties results from the number of Berlin-wide criminal complaints to the judiciary. Since the beginning of the pandemic, these have initiated 2,344 proceedings for violating the Infection Protection Act, and 184 others against unknowns. Most criminal complaints were made in the summer months of June to September – an indication that the parties were in parks or in squares.

There were 556 in July alone, and over 300 in May, June and September each. In the lockdown phases, there were hardly any reports, for example in December 72. Of the 2,344 proceedings, almost 700 were downgraded to an administrative offense and around 900 were completely discontinued.

DSDS: Everything is different! RTL wants to save

Twitter blocks the Chinese embassy in the US for tweeting about... 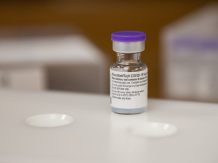 Corona: vaccinations are getting closer – how safe are the vaccines?