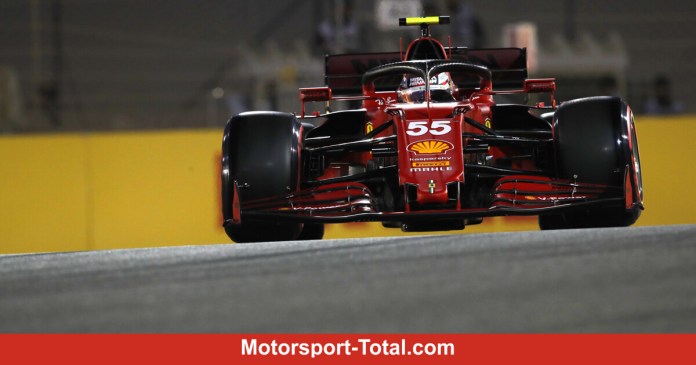 (Motorsport-Total.com) – With fourth place in qualifying in Bahrain, Charles Leclerc has proven that you have to have Ferrari in the fight for third place behind Mercedes and Red Bull on the bill. Monegasse was Best of the Rest in Sachir (Formula 1 2021 live in the ticker) and even beat the highly acclaimed McLaren and AlphaTauri. Carlos Sainz rounded off the good result in eighth place after a moment of shock.

Carlos Sainz stopped short at the end of Q1

Actually, Leclerc was usually slower than his new team-mate over the weekend, but when it came down to it, he was back: “I knew deep down that I could do a good lap. But until you do it, you know it not exactly, “says Leclerc with satisfaction.

“But in qualifying the feeling was good right from the start. I built up the pace and was then able to drive a good lap in Q3, which I’m very happy with,” said the Ferrari driver.

He thus underlined his impressions from Friday that the car was easier to drive than last year. Together with more power in the engine, the Ferrari has taken a significant leap forward: “It feels like we’ve made a significant step. We should be happy with our work.”

Sainz: Thought it would be over

With team-mate Carlos Sainz it was exactly the other way around. Until qualification he seemed to have the upper hand at Scuderia, but in the end it was only eighth for him. But after a small moment of shock in Q1, the Spaniard is happy to have made it into the top 10 at all.

“After this situation, when the whole car had shut down, I thought that qualifying would be over for me,” he says. “That we are in Q3 is therefore a decent result for me.”

Nevertheless, he struggles a little with it that he didn’t manage to get a good time in the final section: “We had a very good Q2, but I lacked the experience a bit in Q3. I had a lot of traffic on the warm-up lap and didn’t know what to do with me Turn 1 expected “, said the Spaniard. “I was maybe a little too conservative, which cost me a lot of time.”

Nevertheless, Sainz speaks of a very good weekend so far. “I won’t let the Q3 lap ruin that,” he emphasizes. Because so far it has not been particularly difficult for him to join Ferrari. Sainz seems to have already arrived at the team and mastered the switch from McLaren.

A little proof: In Q2 the Spaniard even set the fastest time – a thousandth of a second ahead of team-mate Leclerc.

As is well known, points will only be awarded on Sunday, but Ferrari has at least a good starting position, even if the drivers are expecting a close battle. “When it comes to racing pace, the others seem to be a bit ahead of us,” says Sainz. “On the other hand, we have both cars in the top 8 – and I should have been even further up the front.”

“I think we have a good chance tomorrow and if we do a good job on strategy we can get a strong result,” said the Spaniard.

“Realistically speaking, the top 3 are not achievable,” says Leclerc and hopes that he can at least hold his position. But that would be difficult enough – especially with Pierre Gasly right behind. “AlphaTauri was really impressive yesterday. In the long run they were very, very fast, and they start on medium tires. That will be tricky.”

But that is still a long way off. First of all, you can look forward to a successful qualifying in Maranello. But Leclerc emphasizes that it was only the first qualification and that you should keep your feet on the carpet. “But it looks promising at first. I’m looking forward to being further ahead again.”

Outlook: ServisFirst Bancshares opens its books for the past quarter |...

Gigabit connections even without direct fiber from 2021