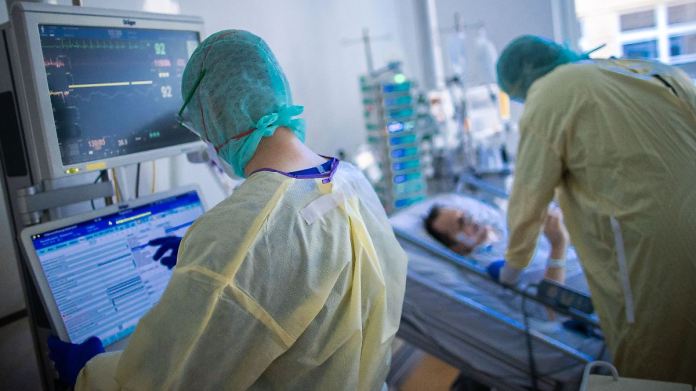 The corona pandemic has been rampant for more than a year. However, a lot has happened in the treatment of Covid 19 patients since then. Senior physician Harald Prüß explains which drugs are effective and which are not – and how the survival chances of intensive care patients have developed.
It has now been more than a year since the first Covid 19 patients came to German clinics. A study published by a German research team in the journal “The Lancet Respiratory Medicine” shows that a lot has improved this year. The scientists analyzed health insurance billing data of discharged Covid-19 patients from all hospitals in Germany in 2020. An important result: The proportion of patients who had to be treated in intensive care fell significantly over the course of the year.

According to the evaluations, between March and May 2020, every third hospital patient suffering from Covid-19 still required intensive care care. In autumn 2020 there were only half as many patients. Doctors are therefore increasingly successful in treating patients with relatively severe courses and thus preventing very severe courses that require intensive care.

The treatment of people with severe Covid-19 disease is extremely complex. Overall, around 12 to 15 percent of all infected people need hospital therapy. You develop an excessive reaction of the immune system, the coagulation system goes crazy. As a result, they come to the clinic with disorders of the respiratory tract, the skin, the cardiovascular system, kidney failure, dangerous blood clots or even a stroke.

“5 out of 100 infected people quickly become life-threatening and receive intensive medical treatment,” says the scientist and senior physician Harald Prüß. At the German Center for Neurodegenerative Diseases (DZNE) he heads the research group “Autoimmune Encephalopathies” and is also a senior physician at the Clinic for Neurology with Experimental Neurology at the Charité – Universitätsmedizin Berlin. He emphasizes the importance of preventing severe disease from deteriorating to the point that it requires ventilation. “Unfortunately, invasively ventilated intensive care patients with Covid-19 still do not have a good prognosis,” says Prüß. “The data shows that one in two of them is still dying, both at the start of the pandemic and today.” Elderly people with risk factors for cardiovascular diseases and / or previous illnesses are particularly affected.

Medicines and forms of therapy for Covid-19 treatment

The good news: There are now many scientifically based, effective drugs and treatment options for patients who do not need invasive ventilation, i.e. who can still breathe independently. “Steroids such as dexamethasone are the absolute standard of therapy and have now been included in medical guidelines,” said Prüß. The cortisone significantly reduces the excessive immune reaction. “Studies show that seriously ill patients stay in hospital for shorter periods of time on cortisone, are ventilated less often and die less often.” However, the preparation should be administered carefully.

In addition, patients are given preventive drugs such as heparin, which control the out-of-control coagulation system. “By far the most important thing for patients, however, is oxygen, after all, the lungs are primarily affected by Covid-19,” added the senior doctor. Oxygen can significantly reduce mortality.

Other active ingredients, however, have proven to be a flop. “Over the past few months, more than 100 drugs have been tested for effectiveness against Covid-19 worldwide,” says Prüß. These include cardiovascular drugs, suppressive immunomodulators, antibiotics, vitamins and active ingredients that have been developed against other viruses such as hepatitis C, flu, Sars or Mers. “So far, none of these substances has made it into widespread use,” sums up the neurologist, who himself treats patients in intensive care units. “Even remdesevir is no longer recommended by the WHO.”

Remdesivir and serum therapy have only limited effectiveness

The preparation works against other viruses by suppressing the copying machine in human cells, so to speak, with which the pathogens multiply rapidly. Remdesivir was last used in Africa to treat patients in the Ebola epidemic, with little success. It has recently been approved in the European Union for early Covid-19 therapy when seriously ill people require oxygen but are not yet ventilated.

According to Prüß, the so-called serum therapy was also overestimated. Blood is drawn from people who have already been infected with Sars-CoV-2. The plasma, i.e. the liquid part of the blood, contains antibodies against the virus. The serum therapy, which was already used during the Spanish flu, experienced a revival in the corona pandemic in China and the USA – despite the lack of evidence. In this country, too, patients are treated in this way at several clinics. “However, the majority of the studies show that there is no convincing effect,” says Prüß.

“Quality-tested, synthetically produced monoclonal antibodies are far more promising,” explains Harald Prüß. These are proteins that are active in the immune system and that only bind to a single point on the target molecule. Therapy with monoclonal antibodies means that these are administered directly to the patient, whereby the antibody recognizes the virus, binds to it and neutralizes it. Two antibodies from the US manufacturer Regeneron (casirivimab / Imdevimab) and Eli Lilly (Bamlanivimab) have already been approved in the USA. “All the studies that led to the emergency approval there were able to show that the antibodies help in the early phase of Covid-19,” said Prüß.

The Ministry of Health recently bought 200,000 doses of these US antibodies for Germany as well. “In this country, the antibodies are already being used sporadically at the Charité and other university hospitals,” says Prüß. “They should now also be used quickly in the outpatient area in order to prevent worsening of symptoms and a hospital stay as early as possible.” In contrast to an active vaccination – in which the immune system itself forms antibodies against injected weakened pathogens or pathogen components – the human body receives finished antibodies against the virus with this so-called passive vaccination.

Together with his team from the German Center for Neurodegenerative Diseases and the Charité, Prüß himself is working on a passive vaccination. The scientists have just completed the planning for the phase I and II studies. The industrial partner Miltenyi Biotec is currently producing antibodies in large quantities. “As soon as we have the antibodies in hand, the studies can begin,” says Prüß. “With a bit of luck, our antibodies will be ready in Germany next autumn.”

It doesn’t work without shaking hands

Julian FM Stoeckel on the planned jungle show for 2021

Truck production – consortium wants to save 1,850 jobs at MAN...

So the concert went with 1000 tested visitors in the Berlin...