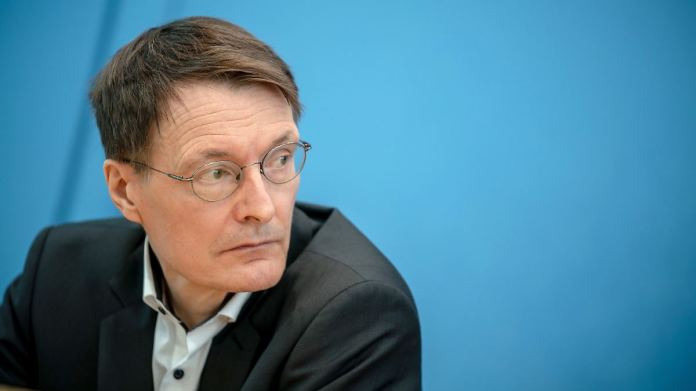 The third wave is rolling, and it should also affect many who have not yet perceived corona as a deadly threat. An increase to 100,000 deaths can only be prevented with a package of measures, says Karl Lauterbach. This includes a night curfew – but under no circumstances should you change the sequence of vaccinations.
14 months after the first confirmed corona case in Germany, the country mourns almost 76,000 deaths from the virus. Because the vaccination campaign is having an effect on people over 80, the death rate has been falling for weeks – but that could soon change, fears the SPD health expert Karl Lauterbach. “We have to stay well below 100,000 dead,” said the German government’s corona advisor to the “Tagesspiegel”. That can only be achieved with a combination of measures. Exit restrictions, compulsory testing, especially for companies, and faster first vaccinations are urgently needed. “Otherwise we won’t make it,” said Lauterbach.

After the only far-reaching decision in the round between the Chancellor and Prime Minister was overturned with the “Easter rest”, Lauterbach is calling for a new corona summit to be called quickly. He should then decide on a curfew, between 8 p.m. and 6 a.m., nationwide and for at least two weeks.

The epidemiologist has little left for the model projects now planned for the whole of the republic: “We don’t need youth research now, so neither do Tübingen everywhere.” Especially the Saarland, where there are supposed to be country-wide easing, behaves dishonestly: “There you got additional vaccination doses because they are border regions and there the South African mutant is spreading. But it is also lacking in solidarity because we are ruining our entire embassy with it.” One urgently needs to reduce contacts. “The model tests are nothing more than fig leaves for loosening. It is an illusory idea that we can loosen up and the number of cases still go down. That is absurd and will not work.”

EU too passive in building up vaccine production

Lauterbach describes the hesitant vaccine procurement by the EU and the federal government as the biggest mistake in coping with the pandemic. “They did it like customers who wait for vaccines to be on the market at some point and then get the appropriate quotas.” Instead, like the USA, one would have had to act as an investor who was involved in building up mass production. According to his calculations, Europe would have had to take 24 billion euros into its own hands for this. Then the vaccination program would have been completed in April. But the EU did not spend four billion. Lauterbach had already called for mass production to be set up in May 2020, but remained unheard of.

In order to immunize as many people as possible with the now available vaccine in the third wave, Lauterbach advocates further stretching the vaccination intervals. “I consider twelve weeks to be justifiable at Biontech, even if it goes beyond the actual approval interval,” he said in the “Tagesspiegel” interview. Even after the first vaccination, the protection is very high. The vaccination intervals had already been extended, at Biontech to six and at Astrazeneca to twelve weeks. “According to our calculations, this will save 8,000 to 14,000 lives.” If only initial vaccinations were carried out now, according to his calculations, the vaccine would be sufficient for 60 million citizens.

Lauterbach thinks little of the idea of ​​changing the sequence of vaccinations and preferring younger people with many contacts. “That must not happen under any circumstances.” It is simply the case that the under 80-year-olds sometimes have very, very difficult courses. And not only did many of them get sick, but many of them would die. “I cannot convey to these people now that 20-year-olds are preferred to be vaccinated so that they can party without infecting others,” Lauterbach continued.

Warmest year in Germany since 1881!

Seniors gamble and marvel at the realistic graphics “The Masked Singer Austria”: Nicole Beutler was the sheep

Drosten to Astrazeneca stop: “We need this vaccination” – miscellaneous from...