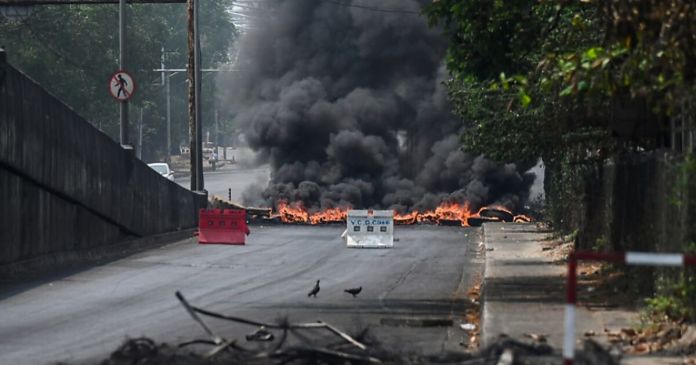 The situation is becoming more and more confusing. Since the beginning of the week, the junta has largely blocked Internet access on mobile devices during the day. The internet has been blocked every night for weeks. Since the coup, observers have repeatedly posted photos and videos of the violence on social networks.

“I saw several dead last night, but there was no internet connection and no local media,” said a protester from the working-class district of Hlaing Tharyarn in Yangon, where the military recently cracked down on the protests. Martial law has been in effect here, as in other parts of the city, since Monday. “Anyone can now be killed under this new rule,” said the man.

Meanwhile, the UN called for the crimes of those in power to be documented. Mostly the main culprits of such crimes are in high positions, but not personally at the crime scenes, said the head of the UNO observation team for Myanmar, Nicholas Koumjian, on Wednesday in Geneva. Appropriate evidence is required to prove their responsibility. Therefore, people who have such information should forward it to the UN via secure channels, such as the Signal app.

Pope Francis also called on the military to exercise restraint. “I too kneel on the streets of Myanmar and say: The violence must stop. I also stretch out my arms and say: The dialogue has to prevail. Blood does not solve anything, the dialogue has to win,” said Francis at the streamed about the Corona measures General audience. In the past few days the Pope had repeatedly pleaded for peace in Myanmar.

After the coup on February 1, the military took the de facto head of government Aung San Suu Kyi into custody and imposed a one-year state of emergency. The protesters are calling for a return to democratic reforms and the reinstatement of Suu Kyi’s civilian government. The 75-year-old had clearly won the parliamentary election in November.

Waldshut-Tiengen: The truck lands in the Rhine near the Swiss border

Successful vaccination thanks to Brexit ?: Blair’s “Spin Doctor”: “Lies from the start”

Spring break in Miami Beach is spiraling out of control – world

Kremlin blames Brussels: Russia: relations with the EU are “destroyed”

Tensions between China and EU after new sanctions

China’s ambassador invited to the Federal Foreign Office for talks

Controls in Tyrol: Without a test, it was over at the...

Fakes in circulation: this is how you recognize fake Airpods No breakthrough at Brexit dinner – last deadline until Sunday

Burglars set off explosives alarm in Pankow! It was just...