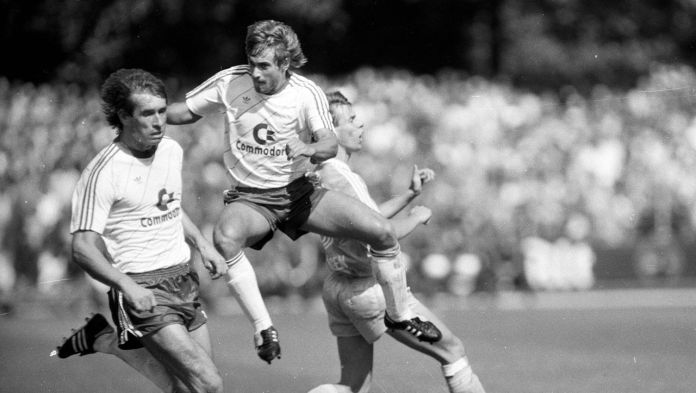 August 10, 1985 was a special date for Bayern defensive player Helmut Winklhofer. And now that the “Goal of the Month”, the vote for the best hits in the ARD “Sportschau”, turns 50 this Sunday, is a good time to remember.
Bayern coach Udo Lattek had Winklhofer, then 23 years old, in the starting line-up after his return from Leverkusen. And the Munich team wanted revenge: On this first matchday it went to Bayer Uerdingen, the opponent against whom they had sensationally lost the DFB Cup final a few months earlier.
The game in the Grotenburg arena rippled on until the 34th minute, until Winklhofer’s big appearance, as he described it years later in the magazine “11 Freunde”: “The accident happened after a good half an hour in your own half, for example 15 meters behind the center line when a cross pass came towards me. I just wanted to lift the ball over my opponent’s foot. Unfortunately, this lob turned into a really nice long-range shot. At first I looked after the ball and just thought: ‘Man, it goes a long way!’ Then the ball really took off and flew, flew, flew. Since our goalkeeper Jean-Marie Pfaff was too far in front of the goal, the ball fell into the right corner. ”

Pfaff of all people, many may have thought at that moment, because the Belgian had already been at the center of a scene three years earlier in his Bundesliga debut that led to a curious own goal: At that time he had wiped the throw-in by Bremen’s Uwe Reinders into his own goal. And the “Sportschau” called Reinders to regretfully inform him that own goals are not included in the selection.

Three years later things were different. Which in turn angered Bayern. “A macabre number,” said Winklhofer, who would otherwise have considered the own goal thing to be “quickly ticked off”.

Of course, the spectators did not miss this opportunity. An own goal, so nice and also undermined by the unpopular FC Bayern – this opportunity to give the Munich team a go was not missed. Of course, Winklhofer’s goal won the vote for “Goal of the Month” in August 1985.
Winklhofer described Uli Hoeneß’s reaction for “11 Friends”: “After the election, Bayern manager Uli Hoeneß came to Jean-Marie and me and said that we had been invited by ARD. The request was decided negatively by the association. Hoeneß literally broke the collar. ‘I can kid myself,’ he said. And: ›Why should we sprinkle more salt on the wound?‹ «
Neither Winklhofer nor Pfaff therefore traveled to the award ceremony. Winklhofer still got his medal: Eberhard Stanjek from Bayerischer Rundfunk presented it to him at the FC Bayern Christmas party in the Schlosswirtschaft in Leutstetten with the words: “Here, Helmut, take a look, here you have the controversial object!”

However, the “Sportschau” didn’t seem to feel at ease: In 1993, Hertha’s Frank Rohde scored one last time in his own network. In the meantime, the nomination of own goals has been dispensed with.

In that ominous game at Bayer Uerdingen, Winklhofer was replaced at halftime by striker Roland Wohlfarth. The game was lost 0-1. The rest of the season went well for Winklhofer, who played in 24 games and scored three times in the opposing goal. Bayern jumped to first place for the first time on matchday 34 and became German champions.
In the following season Winklhofer came again to 25 Bundesliga games in the Bayern jersey, and with the team he reached the final in the European Cup. He faced the greatest success of his club career against FC Porto, until Rabah Madjer robbed Bayern of their belief in victory with his ingenious heel trick equalizer. Winklhofer’s Munich team lost 1: 2, Madjer’s goal was – you guessed it – voted “Goal of the Month”.
The following year Winklhofer played his last game for FC Bayern at the age of just 27. The 1981 U20 world champion had to end his career after only 140 Bundesliga games due to an injury. After the 35-meter lift in August 1985, he never scored another »Goal of the Month«.

He doesn’t want to talk about his goal anymore today, because Winklhofer has already talked too much about it. He once said: “If the› Sportschau ‹hadn’t tried to ridicule FC Bayern at the time, it would never have become such a big topic.”

“Tatort” today from Cologne: “The death of others” in a quick...

Federal Councilor Alain Berset: “There were moments when I no longer...

Anklam in Mecklenburg-Western Pomerania: car crashes into river – driver and...

Huge overproduction of eggs due to lockdowns