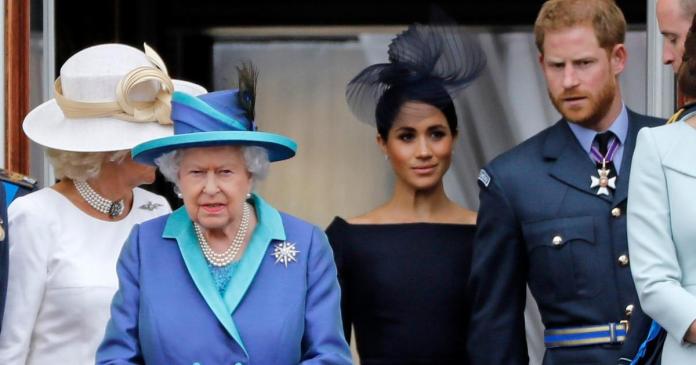 Accordingly, two personal assistants of the former US actress are said to have thrown because of the high pressure that Meghan had built up. There was talk of humiliation and tears. This emerges from internal palace emails that were leaked to the sheet. What exactly Meghan is accused of remained unclear.

Meghan’s lawyers described the allegations in a letter to the Times as a “calculated smear campaign based on misleading and harmful misinformation”. It is no coincidence that these “distorted, several year old allegations” were brought to the British press shortly before Meghan and Harry wanted to speak “openly and honestly about their experiences of the past few years”.

“Meghan is saddened by the recent attack on her person, especially as someone who has been a victim of bullying and is fully committed to helping those who have suffered pain and trauma,” added a spokesman for Meghans and Harrys . Buckingham Palace, however, did not want to comment on the matter.

Buckingham Palace announced on Wednesday evening that the human resources department would investigate the allegations. One is “very concerned” about the in that Times-Article allegations. The employees involved, including former employees, should be involved. The royal family will not tolerate bullying or harassment in the workplace, it said in a written statement.

Harry and Meghan had turned their backs on the royal family at the beginning of last year and announced that they would become financially independent. Together with their now one-year-old son Archie, they first moved to Canada, then to the USA. A decision they do not want to reverse either, as was recently confirmed.

Externally, they had always justified the move with the great burden of continuous observation and unfavorable reporting in the tabloid media. Harry complained in autumn 2019 about “sexism and racism of trolls in social networks” and a racist undertone in parts of the British press towards his wife. But even differences within the royal family could no longer be concealed at that time. During a trip to South Africa, he confessed in front of the camera that he and his brother William were “certainly on different paths”.

An obvious sign of this break was that the Duke and Duchess of Sussex, as Harry and Meghan are called in Great Britain, had already withdrawn from the joint foundation with William and Kate in the summer of 2019. The once shared Twitter account of the Kensington Palace was now only managed in the name of Kate and William.

About the background, at least from the point of view of the Sussexes, something should come to light in the Oprah Winfrey interview. The US broadcaster CBS had already advertised the conversation with Meghan and Harry with smaller excerpts. In it, talk host Winfrey says, among other things: “You said some pretty shocking things here.” It remains to be seen whether Meghan and Harry will actually settle accounts not only with the media, but also with Buckingham Palace and the royal family. The interview will only be broadcast on US television on the night of March 8th (CET).

“Year of disillusionment”: DIW boss no longer expects the economy to...

Pandemic – proof of the new coronavirus variant also in France

Quant.CM: The shock for the markets is unexpected and hard |...