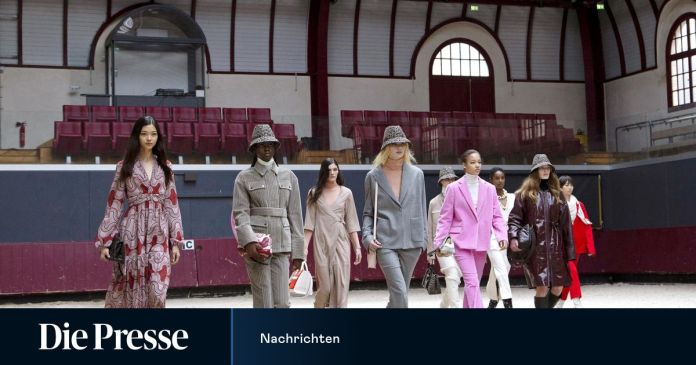 Gabriela Hearst made her debut at Chloé and focuses on sustainability, while Dries Van Noten focuses on dancers instead of models.

During the Paris Fashion Week, designer Gabriela Hearst presented her first collection for Chloé. The designer, who is known for sustainability, calculated in the press release that the collection is “four times more sustainable than last year”. For example, polyester and viscose have been eliminated from the collection and recycled organic denim fabrics have been used. More than half of the silk comes from organic farming and more than 80 percent of the cashmere content in knitwear is also recycled. As with her own label of the same name, Chloé is now making CO2 compensation payments.

The new Dries Van Noten collection was presented with a contemporary dance performance. The designer, who likes to dance himself, has made “feeling” and “movement” the main themes of his collection. “To see these muscular bodies, how they move in the clothes, that is much nicer than any perfect model”, the designer explains in an interview with “Vogue”.

Sophie Delafontaine, Creative Director of Longchamp, was inspired by the racing horse logo and the French interior designer Pierre Paulin. And so the Battesti riding arena was also used for the presentation of the collection.

Rick Owens presented his collection during the Paris Fashion Weeks not in France, but in Italy. In Venice, to be precise, because this is where the designer currently lives and the company’s atelier is also located here. The designer’s collection is less optimistic than that of his colleagues. His models wore masks, and the clothes covered the models like tanks.

Real Madrid at Shakhtar – the “royal dance” between disaster and...

Filderstadt-Plattenhardt: After a fire and break-ins, the housing order issued –... CDU chairmanship: who will be the new party leader? –...

Chip trap: “Massively increase the proportion of semiconductors in Europe”

Coronavirus: autopsy of the dead – relatives for it – SWR...