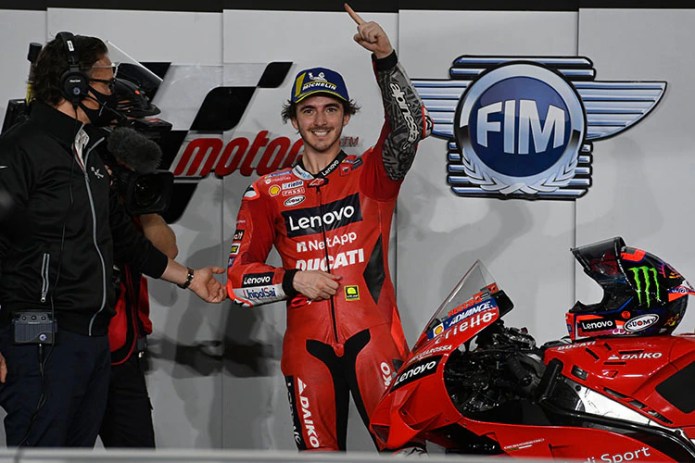 Pecco Bagnaia shone with a fabulous unofficial lap record on her debut with the Ducati factory team in Q2 in Doha. He still worries about Sunday.

After two years at Pramac Ducati and so far only one podium (2nd place in Misano 2020), Francesco “Pecco” Bagnaia achieved his first pole position in the MotoGP class today at the Losail International Circuit. The 2018 Moto2 world champion provided an “all time circuit best lap” with a time of 1: 52.772 minutes. He pushed the Yamaha aces Fabio Quartararo and Maverick Viñales into second and third place.

It had already become apparent on Friday that the 1: 53-minute barrier could fall here for the first time. And in Q2 it was Bagnaia, of all people, and not team mate Jack Miller, who set the fastest time on Friday, who put his Desmosedici on the best starting position.

Bagnaia withstood the pressure, he is on pole position on his debut in the Factory Team, on a track where Ducati won three times with Stoner from 2007 to 2009 and also with Dovizioso in 2018 and 2019.

«I am very happy because it is the best way to start this new chapter in my career with the new team. Yesterday I thought that I could drive 1:52, because on Friday I made a few mistakes on my best lap. I then speculated with 1:52 min … »

“In the race, however, I am expecting a large group of leaders, because all four Yamaha riders are very strong in the T2 and T3 sectors. But with our top speed we can catch up on the straight line in sector T4. “

If you look at the results of FP4, in which all drivers drive with a racing set-up, Pecco has to deal with numerous strong opponents. Can he imagine a fight with seven, eight or nine pilots?

“I hope not,” he laughed. “But the possibility is there when we look at the pace of our opponents. Yamaha is there, Suzuki, other Ducati colleagues. We’re a lot… There are a lot of favorites to consider to win. In FP4 it became clear that many of our colleagues are very strong in terms of pace. I made a couple of mistakes in FP4. In addition, my used rear tire was from Friday. He couldn’t cope with the cooler temperature. But in the race we won’t be doing a low 1: 54-minute lap because we have to take care of the tires. The pace will be higher than 1: 54.2 or 1: 54.3 min. But I agree: Eight or nine drivers can be at the top. “

A storm at 45 to 65 km / h is predicted for Sunday. It is hardly possible to drive under such conditions. Because of such a sandstorm, the test day on March 12th had to be canceled. In the worst case scenario, postponing the Grand Prix to Monday must be considered.

Bagnaia: “Our motorcycles at Ducati are susceptible to wind. That’s why I’m concerned. But when it really gets as stormy as during the test, driving becomes very, very difficult, also because of the sand. We now have to wait for the weather on Sunday. I very much hope that we can handle a normal Grand Prix. But all other brands, including Yamaha, are also susceptible to wind. They all have similar problems. Except Honda. ”

Hamburg should get Jan Fedder Promenade on the Elbe | ...

Is the corona vaccine unevenly distributed in the EU?

Corinne Suter also in the top 3 in the Super-G

These discounts are now available after Black Friday

Cyberpunk 2077: That’s how long you need for the single player...

A guide to the end of civilization