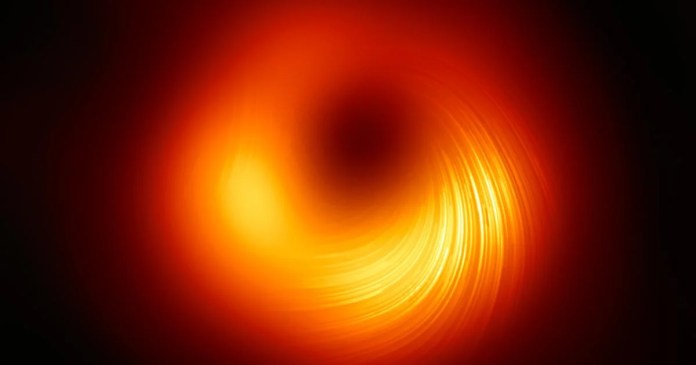 The analysis of the legendary recording revealed exciting news. The photo has therefore been updated.
It has been almost two years since researchers succeeded in capturing a black hole for the first time. Since then, imaging of the M87 galaxy has preoccupied science around the world. An updated photo was published on Wednesday that shows the extreme magnetic fields close to the edge of the black hole. This was made possible because astronomers could measure the polarization of light triggered by the fields. It becomes clear how the galaxy, 55 million light years away, emits energetic currents from its core.

The bright jets of energy and matter emerging from the core of M87 and spreading at least 5000 light years from its center are one of the most mysterious and energetic features of the galaxy. Most of the matter that is near the edge of a black hole falls into it. However, some of the surrounding particles escape shortly before being captured and are thrown far into space in the form of jets. However, this process has not yet been fully understood.

The updated photo was hailed as another breakthrough by the EHT (Event Horizon Telescope) research collective, which was responsible for the original image. “The newly published polarized images are the key to understanding how the magnetic field enables the black hole to devour matter,” EHT collaborator Andrew Chael is quoted as saying in a broadcast.

With the new EHT image of the black hole and its shadow in polarized light, it was possible for the first time to look into the region just outside the black hole, in which this interplay between incoming and ejected matter takes place. These observations would provide new information about the structure of the magnetic fields just outside the black hole. The team found that only theoretical models with strongly magnetized gas can explain what they see at the event horizon.

“The observations suggest that the magnetic fields at the edge of the black hole are strong enough to push back the hot gas and help it withstand gravity. Only the gas that slips through the field can spiral inward to the event horizon, ”explains Jason Dexter, coordinator of an EHT working group.

Man exercises unauthorized for driving test – and is caught –...

The changes to the new gaming law in Germany presented (aktiencheck.de)...

Reduce the risk of myocardial infarction after SARS-CoV-2 infections

Comment: Thank you, dear Viennese, for helping to finance my corona...