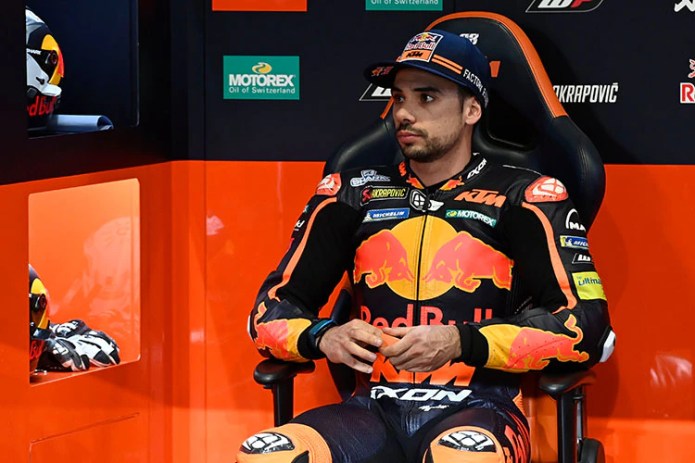 KTM put the best rider in 15th place in Losail qualifying. Motorsport Director Pit Beirer (48) analyzes the situation in an interview with SPEEDWEEK.com.

The four MotoGP factory riders from KTM Factory Racing didn’t get past positions 15, 19, 20 and 21 in qualifying 1 at the Losail International Circuit on Saturday. Pit Beirer, Motorsport Director at KTM, speaks plainly: “These qualifying results cannot be glossed over.”

Pit, in the tests the best KTM landed in 16th place, also on Friday in the first two free practice sessions. Is that why you had to expect such a qualifying result?

Yes, we weren’t there at the top 3 press conference after qualifying … We were just behind. (He smiles.)

Rossi got behind the Ducati of his protégé Pecco Bagnaia twice in Q2. There would have been three Ducati in Q1 – from Bastianini, Martin and Marini. The KTM drivers could have got involved there.

But we would have needed a strong tow rope.

The KTM riders are still struggling to keep up with the competition over a fast lap.

Yes, the tests two weeks ago already showed that this would be a difficult weekend for us. We are now working hard. With small changes we have reduced the arrears a bit, and our race pace now looks so that at least Miguel Oliveira feels really comfortable again.

Our bright spot was definitely our racing speed in FP4. Miguel presented himself very well with 4th place. But this single fast lap is obviously difficult for us. We have to work on it because of course you need a good starting position if you want to be up front.

To use new tires optimally and to lower them again for a second, our device is not able to do that at the moment.

Our motorcycle looks clean and calm outside on the track, it sometimes drives like it is on rails. But the lap time is missing. And of course you don’t have to win a beauty award here in MotoGP, you have to be fast. And we are not to the extent that we imagine. We don’t even need to gloss over that.

Brad Binder was convinced on Thursday that the KTM technicians had ideas and that solutions had been found. But nothing has changed in the positions.

After the tests, it was clear to us that we would not look extremely good here at the start of the season for each lap. But we saw very clearly with Miguel on Saturday that we were able to bring together a competitive race set-up with him. We have focused on that.

But of course it annoys the drivers when they are so far back. You don’t just want to work for the race. They want to see their name at the top of the list in the free practice sessions too. We have certainly not found the necessary coordination for this. Point. Out. Amen.

We have to stay calm and still have a good race.

Brad Binder was in 9th place in the test as a rookie a year ago. Such bright spots have rarely been seen in 2021 so far. Why is that? On the chassis, on the suspension, on the harmony with the tires, on the aerodynamics?

There is a little missing in all areas. It’s unbelievable how dynamic the MotoGP World Championship is. The “circuit best lap” has just been pulverized by seven tenths. It’s amazing how every manufacturer has found lap time again. Especially in a phase in which motorcycle development is technically frozen.
Every manufacturer has taken steps forward, and at least once we have not been able to take the step for Qatar.

But we haven’t contested a race yet and will definitely improve on Sunday.

We have to make sure that we can manage it properly on Sunday and deliver a decent race. That’s still possible.

Did you make any mistakes during the test drives in Doha? It was heard that the drivers often chased the times at the wrong moment. But all four drivers in four days? Newcomer Petrucci had to test a new airbox, although he was more than 1.5 seconds short of the best time. Isn’t that the job of Pedrosa, who had five days to do it?

We have to test the new parts at some point. If all winter tests are canceled, we will also have to test with the regular drivers. We weren’t the only ones. Sure, we would have preferred to do a successful test. Of course we had a lot of parts to test. But at the end of the day, only the lap time counts. And there we are still a little way away.

During the tests, we ran through the entire planned program. But there is an uncomfortable residue that we have to work away again.

We have often stood in the corner with our backs against the wall and freed ourselves again. We will do that again this time.

If I look critically at the situation, Petrucci and Lecuona stand where Pol Espargaró and Smith stood at the MoptoGP debut in Doha in 2017. In the last row. Do you still know the way there?

Yes, these are facts. But we’ll be better off on Sunday evening.

At the same time we cannot gloss over the starting positions 20 and 21 of Danilo and Iker. These are places where we don’t feel comfortable. We were better. So far, not everything is as perfect as it should be.

Is the KTM weakness a specific Losail problem? Or is it to be feared that it will continue like this in Portimão and Jerez because the opponents have taken a bigger step than KTM?

It would be too easy to say that this is only up to Qatar now.

Qatar is part of the World Cup. If you want to be up front, you have to be competitive everywhere. We didn’t manage to do that here for the first two days. Now there’s a race tomorrow. Another race will follow next Sunday. We’re still very early in the season.

We mustn’t panic now. We’re trying to help the drivers where they suffer the most, that’s the team’s job now. We have a strong team and we will do everything we can to make the drivers happy.

Yes, we have to see whether there will be a race at all under such circumstances.

Dorna announced on Friday that postponing the races to Monday was unthinkable.

Yes, but I heard something else on Saturday. Of course we would like to race on Sunday. But when it’s as stormy as it was on the last day of testing, it’s just impossible.

So far we have assumed that the Grand Prix will take place on Sunday and that we will improve in the race.

Can Covid-19 be recognized by the tongue?

BVB star Raphael Guerreiro is also out against Sevilla

Buy PS5: New wave of sales this week? Everything about...

Ethereum climbs to $ 2,000 in the slipstream of Bitcoin

Apex Legends: This is what awaits you in the Fight Night...