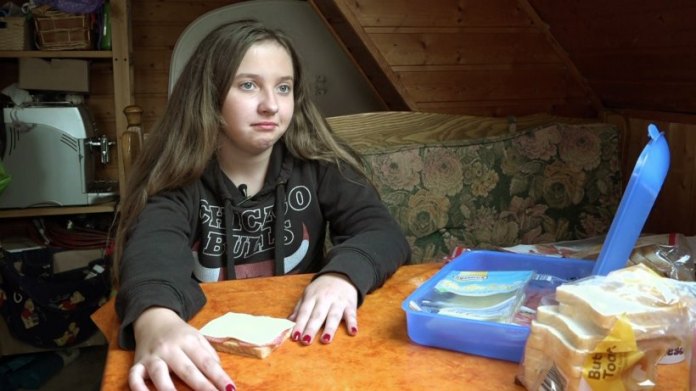 “Poor Germany”: Girl (13) doesn’t want to eat anything for days – the reason is shocking

In der Doku-Soap „poor Germany – Your children ”, RTL2 focuses on minors who grow up in poverty. While some, despite Hartz 4 starve, the others are on the verge of homelessness.

On Tuesday the TV crew of “poor Germany“13-year-old Ashley in Baden-Württemberg. She has no real clue about “Hartz 4” regulations and the like, but the family drama has not left her without a trace.

Ashley currently lives in a multi-story house with her four siblings and mother Doreen. The mother of five works at night as a cleaner in a fitness studio and earns between 600 to 1,700 euros a month, as she says at “poor Germany“ reported. She can still keep her family afloat, but soon they could all end up on the street.

Because: The family house is to be foreclosed. Ashley’s father is said to be to blame for the accident. Things got dirty after their parents split up. “When we bought the house, we were still a couple. So we bought it together, half of it is in there, half of me is in the land register. In 2012 he changed that I no longer receive any information, ”explains Doreen.

Her ex decided that he would take care of the house loan if she took over the electricity and water bills for the entire building. But one day a bailiff showed up at Doreen’s house, who told her that the house would be foreclosed. Ashley’s father doesn’t seem to have kept his word.

“Hartz 4”: Girl (8) from an unemployed family speaks about her parents – words go to the heart

“Poor Germany”: Son (9) does THAT for his parents – “Make us punishable with it”

“Hartz 4”: Family lives on the verge of subsistence – son (9) does something illegal to support them

On top of that, the house is in dire straits. No hot water, there is no electricity on the ground floor and mold is growing on the walls. A new construction site can be found in every room. Ashley and her siblings have to improvise in the shabby home: “If I have to brush my teeth, I have to go to the kitchen. That’s really disgusting, at least I think. “

So it’s understandable that the 13-year-old no longer feels comfortable. Ashley’s appetite is gone. “Now and then I don’t eat anything for two or three days. I just don’t have an appetite, I’m not hungry, ”she says. The student is visibly suffering from all the stress.

Mama Doreen should warn her daughter again and again when she refuses to eat. “Which I don’t understand, because she sometimes doesn’t eat anything for several days,” says Ashley.

Even if it’s an adult matter, the 13-year-old just can’t stop thinking about what will become of her and her siblings if they are kicked out of the house.

You can find out how things will continue for Doreen and her children on Tuesday evening at 8.15 p.m. on RTLZWEI.

You missed the show? You can find the entire episode of “Poor Germany – Your Children” in the TVNOW media library.

Coronavirus in Germany: Merkel: Thinking about tougher pandemic course has not yet ended – politics

Vaccination in Germany – between hope and fear

U21 European Championship: Germany in the quarter-finals | Dorsch best man

Decision of the health ministers: AstraZeneca only for people over 60

Astrazeneca only for people aged 60 and over | Free press

September 5th instead of July 4th: Challenge Roth is postponed –...

Appointment of Nopper in Stuttgart is delayed – SWR Aktuell

This is how the Germans think about an end to the...

Campus reorganization in Stuttgart-Freiberg: solution for dispute on the way to...

News from skiing – season over for Kilde after cruciate ligament...