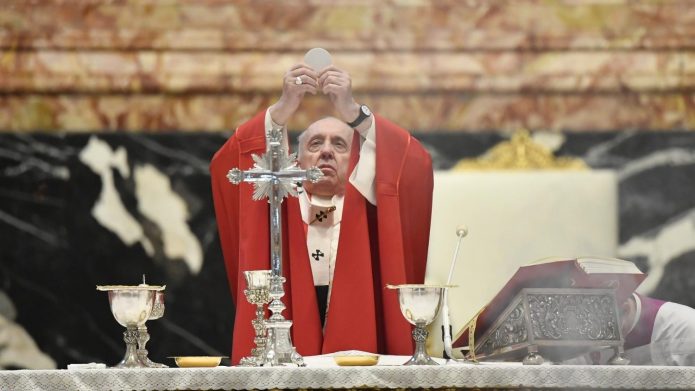 At the start of Holy Week, the Pope encouraged people to be touched by God’s love. “When faith is no longer astonishing, it becomes deaf to the miracle of grace,” he said at the Palm Sunday mass in the Vatican – this applies to both laypeople and clergy. Due to Corona restrictions, the celebration took place in a reduced form in St. Peter’s Basilica.

For the second time in a row, the Pope’s Palm Sunday Mass took place in a reduced form due to the corona pandemic and not in St. Peter’s Square, but in St. Peter’s Basilica. A limited number of believers and concelebrants were admitted in compliance with corona prevention measures. In memory of Jesus’ arrival in Jerusalem, they held olive branches or palm sticks in their hands, which the Pope blessed. There was also a short procession through the center aisle of the basilica.

In his sermon, the Pope first responded to the expectations that Jesus met when he entered the city – the people had expected a powerful deliverer for the Passover, but Jesus had come to perform the Passover through his sacrifice. The joy of the people who received Jesus was only a short time later and Jesus was condemned and crucified. “What happened to those people whose shouts of jubilation turned into, Crucify him!” transformed? ”asked Francis.

Francis with a palm branch this Sunday

“These people followed a certain idea of ​​the Messiah and not the Messiah himself. They admired Jesus, but they were not ready to be amazed by him,” the Pope analyzed. While admiration seeks “one’s own taste and one’s own expectations”, the stowage remains “open to the other, to his novelty”, he separated the two terms from one another. And he asked his audience the following questions:

“Are we still able to be touched by God’s love? Why are we no longer astonished in front of him? Maybe because our beliefs have worn out with habit. Perhaps because we remain closed in our regrets and let our dissatisfaction paralyze us. Perhaps it is because we have lost all trust or even believe that we are worthless … “

Even today, many people admired what Jesus said and did, but without really changing their lives, he pointed out. That was not enough, the Pope made clear. Real conversion is needed: “It is necessary to follow him on his way, to allow himself to be questioned by him – to move from admiration to astonishment.”

A Christian life without amazement becomes “gray”, faith always needs the willingness to be open, said Francis, who addressed laypeople as well as clerics. Because:

“How can you give testimony of the joy of having met Jesus if you don’t let yourself be surprised every day by his amazing love, which forgives us and lets us begin again and again? When faith no longer amazes, it becomes deaf to the miracle of grace, it loses the taste for the bread of life and the word, it no longer perceives the beauty of brothers and sisters and the gift of creation. And he has no other life than to take refuge in regulations, clericalisms and all these things that Jesus condemned in the 23rd chapter of Matthew. “

Even his death was filled with love

Most amazing is the fact that Jesus “triumphs by taking on pain and death.” The “king of kings, whose throne is a scaffold”, empties and humbles himself (cf. Phil 2: 7, 8), chooses a different path than we, “who are looking for admiration and success”. Jesus did all of this “in order to come into contact with our human reality through and through,” said Francis:

“He experiences our worst emotional states: failure, rejection from all sides, betrayal by people who love him, even the feeling of being forsaken by God. He experiences our most tormenting contradictions first-hand, and in this way he redeems and transforms them. His love meets our weaknesses, it comes where we are most ashamed. “

In every wound and fear the closeness of God can be felt, the Pope made it clear, evils and sins never have the last word. Because Jesus’ self-sacrifice has shown how “even death can be filled with love”, with “free and unheard of love”: “The palm of victory grows out of the wood of the cross. The palm branches and the cross form a unit. “

“Let us be amazed by Jesus in order to return to life, because the meaning of life does not lie in having and in self-assertion, but in discovering that one is loved.”

For Holy Week, the Pope called for people to “let themselves be touched by the love of God” while looking at the cross, to “start again” and, above all, to take care of those who suffer:

“Let’s look at the crucified one and say to him: ‘Lord, how much you love me! How precious am I to you! ‘ Let us be amazed by Jesus in order to return to life, because the meaning of life is not in having and self-assertion, but in discovering that one is loved. (…) And with the grace of wonder we understand that we love Jesus by welcoming the rejected and reaching out to those humbled by life. Because he is there, in the last, in those who are rejected. “

Trade fair in compliance with the corona protective measures

“Maradona fell before his death”

Cracker in the World Cup round of 16: Crazy darts spectacle...

Hamburg prohibits the sale of alcohol for direct consumption | ...

Donald Trump wants to give a speech on TV – But...

MG Motor Austria – DENZEL Group takes over the distribution of...