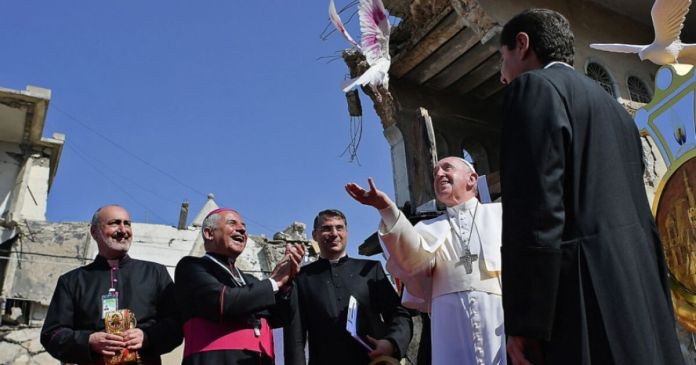 Numerous people were walking the streets of the city. The way to the church square led Francis past the ruins of the city. IS fighters took control of Mosul in 2014. Between 2016 and 2017, Iraqi forces recaptured the city with the support of the international coalition. The city was badly damaged in the heavy fighting. The church square, where four Christian churches once stood, is symbolic of this. Surrounded by the rubble and ruins of the places of worship, Francis said: “If God is the God of life – and he is – then we are not allowed to kill the brothers and sisters in his name.”

At the end of the ceremony in Mosul, a memorial stone was unveiled in the church square to commemorate the papal visit. Francis raised a dove of peace before continuing to Qaraqosh, where he said the Sunday Angelus prayer in the Church of the Immaculate Conception.

Surrounded by a convoy of security forces, the Pope drove past the crowds of people at the roadside in Quaraqosh, which is mostly inhabited by Christians, and waved to them. “Never stop dreaming,” the Pope encouraged believers in the Church of the Immaculate Conception. Certainly there are moments when faith can falter; this was the experience people would have had in the darkest days of the war. This also applies to the corona pandemic and the associated uncertainty, said the Pope.

The Pope was particularly impressed by the story by a Christian woman. The woman told of an ISIS attack in August 2014. Her son was killed and she fled Qaraqosh. “She said survivors of the terrorist acts should forgive,” Francis emphasized. That is also important to remain a Christian.

Like many other Christians in this region, the people of Qaraqosh have been the target of persecution and violence under the rule of IS. Tens of thousands fled to Erbil, the capital of the Kurdistan Autonomous Region, or sought protection abroad. Aid organizations are running projects in the region to enable the refugees to return.

In the Kurdish capital Erbil, Francis wants to celebrate a mass with several thousand believers in a football stadium later in the afternoon. He is supposed to fly back to Rome with his delegation on Monday.

SHARE IN FOCUS 2: Nordex continue to stabilize thanks to convincing...

CropEnergies reduces forecast for financial year 2020/21 after the announcement of...