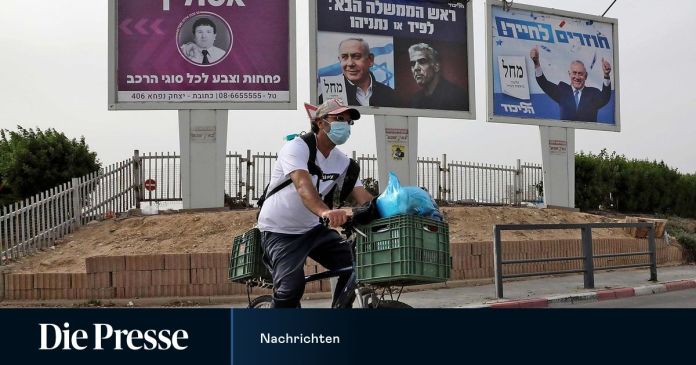 Prime Minister Netanyahu’s situation has deteriorated. He would need the support of the settlers’ party and the new Arab party. A fifth election within two years does not seem to be ruled out.

After the fourth parliamentary election within two years, a way out of the political crisis is in Israel not in sight for the time being. As the preliminary result published on Thursday evening shows, neither the parties considered to be supporters of Prime Minister Benjamin Netanyahu nor his opponents achieved a clear majority. A total of 13 parties made it into parliament. The Arab party Raam could tip the scales.

There are now difficult and lengthy talks about forming a government in the country. Another election this year is not ruled out. The official final result will be published next Wednesday.

The Israelis voted on Tuesday for the fourth time in just two years on the composition of the Knesset in Jerusalem. The vote had become necessary because the alliance between Netanyahu and his opponent in the past elections, Benny Gantz from the center alliance Blau-Weiß, which was concluded last spring under the impression of the corona crisis, broke after just a few months in the course of a budget dispute.

Jamina and Raam should both support Likud

According to the preliminary results from Thursday evening, the right-wing conservative Likud of Netanyahu remains the strongest force. However, it is not enough for the alliance of right-wing and religious parties sought by Netanyahu for a majority. The 71-year-old would have to rely on the support of the settler-friendly Jamina party and the Raam party. The chairman of an ultra-right party that is to become part of the alliance sought by Netanyahu has already rejected the formation of a coalition with the involvement or tolerance of the party of the Arab Israelis.

Due to differences in content, the anti-Netanyahu camp is also likely to have difficulties in gathering enough coalition members for a majority of 61 MPs. If Raam were to join this block, he would get this number. The strongest force in the camp is the second-placed Future Party. It is headed by the previous opposition leader Jair Lapid, who rejects a coalition with Netanyahu.

The official final result is to be handed over to President Reuven Rivlin on Wednesday. He then consults with various politicians for up to seven days and then assigns one of them to attempt to form a government.

Netanyahu had spoken out against another vote on election night and called for the formation of a stable government. He has been Prime Minister since 2009 and is the longest-serving head of government in the country’s history. A corruption process is underway against him, and he denies the allegations made.

The many votes in the past few years have caused electoral fatigue and disenchantment with politics among many Israelis. The turnout this time was significantly lower than in the previous votes. Many people have not forgotten the government’s failures in the course of the corona pandemic, which is why Netanyahu was not able to score with the rapid vaccination campaign: The number of infections was sometimes significantly higher than in Germany, and citizens had to come to terms with long lockdown phases. Secular Israelis also held Netanyahu overly considerate of the ultra-Orthodox. Strictly religious parties have recently been important partners of Netanyahu. A dispute arose that put Israeli society to the test.

Startups in Germany seem to be coping with the corona crisis...

NFL: Falcons Nightmare Tom Brady and 8 other highlights of the...