Criticism of Prince Harry and Duchess Meghan – and then of Monaco’s Prince Albert. In an interview, he did not mince his words and gave his opinion on the behavior of the Sussex couple.

Prince Albert expresses criticism of Prince Harry and Duchess Meghan. The reason for his statement is the revelatory interview that the two US talk show host Oprah Winfrey gave and that was broadcast almost three weeks ago. The 63-year-old thinks the royal couple, who withdrew to California after the “Megxit”, was simply wrong to speak in public about their dissatisfaction.

“Such conversations should be held within the family”

In an interview with BBC News Albert von Monaco said of Queen Elizabeth II’s 36-year-old grandson and his 39-year-old wife that he found the couple’s “public display of discontent” as inappropriate. In his opinion, the shape chosen by Harry and Meghan was simply not suitable. Albert emphasized that he could understand that the two of them are under extreme pressure, but “such conversations should be held within the family”, not at prime time in front of the global public. That “bothered him a bit,” said Albert.

“I can sort of understand where from [die Unzufriedenheit] comes, but I think it was not the right setting to have this kind of discussion, “continued the head of the Principality of Monaco. Ultimately, Albert declared that despite everything he only wished Prince Harry” the best “because:” It is a difficult world out there and I hope he will have the judgment and wisdom to make the right decisions. ”

Prince Harry and Duchess Meghan’s interview with talk show host Oprah Winfrey made waves after it was first broadcast on March 7th. Former actress Meghan had, among other things, raised accusations of racism against unnamed members of the royal family and complained that no help was offered to her when she turned to her in-laws with psychological problems and even thoughts of suicide – read a detailed summary here the conversation and the accusations. Queen Elizabeth II responded with a statement after almost two days, Prince Charles showed up “disappointed” in his youngest son, numerous outsiders chatted details out. The interview caused another real quake within the British royal family.

Shops open from January 11th? This is behind the dealer...

Xena: 25 years later: This is what the warrior princess looks... 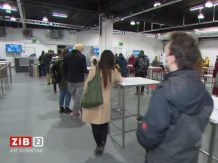 Rush of corona tests before Christmas in Austria – Coronavirus –