Her sharp accusations are followed by a sleek replica!

Almost three weeks after the shock interview with Prince Harry (36) and Duchess Meghan (39), Monaco Prince Albert (63) takes a position on the behavior of the Sussexes.

Prince Harry and Duchess Meghan did not mince words in the “CBS” interview with Oprah WinfreyFoto: HARPO PRODUCTIONS/VIA REUTERS

“It annoyed me a bit,” said the Monegasse of the “BBC”.

The “CBS” show was the wrong time and place to pour out their feelings.

“I understand the pressure they were under. But such discussions should be held in close family circles! “

This is similar to the view of Queen Elizabeth II (94).
In the statement that Buckingham Palace published on behalf of the Queen after the interview was broadcast, it said: “Although some memories may be different, they are taken very seriously and privately processed by the family.”
Harry and Meghan had emphasized in an interview with Oprah Winfrey (67) that racism was a major factor in their decision to move to California.

Bringing such allegations to the public instead of discussing them behind closed doors – Prince Albert also thinks that this is not the fine English way.

Vaccination breakdown in MV: A nurse still in the hospital |... 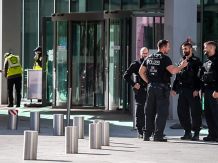 Rising number of cases – cantons want to “gradually open up”...

This is how astronauts celebrate Christmas and other holidays in space