Christoph Berger suggests that those willing to vaccinate may refuse to be vaccinated with the AstraZeneca active ingredient. This should maintain confidence in the vaccination campaign, he argues.
Holger Alich

The vortex around AstraZeneca’s vaccine is continuing. In Europe, confidence in the vaccine has been damaged after the authorities in several countries, such as Germany, ordered a temporary vaccination freeze.

The active ingredient has not yet been approved in Switzerland; according to Swissmedic, the decision should be made “in the coming days”. Switzerland has ordered 5.3 million cans of the AstraZeneca product. Now Christoph Berger, President of the Federal Vaccination Commission, stirs up further doubts about the preparation.

Berger said in the “NZZ am Sonntag” about the AstraZeneca vaccine: “I will only recommend it as an option, which means that everyone can reject AstraZeneca and wait for an mRNA vaccine.” However, anyone who rejects the allocated vaccine and prefers one of the mRNA alternatives from Biontech / Pfizer or Moderna has to be put on the waiting list again.

“I see this option as an answer to the possible vaccine skepticism that threatens to spill over from abroad to Switzerland with a view to the AstraZeneca vaccine,” Berger told this editorial team on Sunday.

It is important that the population maintains trust in the vaccination campaign and that it is avoided that vaccination appointments are missed because there are reservations about the AstraZeneca vaccine.

AstraZeneca for those in a hurry

«If you want to get vaccinated faster, you can get the vaccine from AstraZeneca. Anyone who has concerns can wait and receive an mRNA vaccine, of which there should ultimately be enough for everyone who wants to be vaccinated, ”says Berger.

The President of the Vaccination Commission himself seems to prefer the preparations from Moderna and Biontech. When asked whether Berger would personally like to be vaccinated with the vaccine from AstraZeneca, he only said: “I won’t give you an answer, the agent has not yet been approved.”

Without the AstraZeneca vaccine, it could take until the end of July for all those willing to receive the first of two required doses.

AstraZeneca’s vaccine only plays a marginal role in federal plans. However, the delivery of the vaccine doses could speed up the campaign. Without the AstraZeneca vaccine, it could take until the end of July for all those willing to receive the first of two required doses.

In Germany and other EU countries, the authorities stopped vaccinations with the AstraZeneca drug in mid-March because it was suspected of being associated with very rarely observed cerebral vein thromboses. After a review, the European approval authority EMA could not find any indications of an accumulation of thromboses, but nevertheless considers a warning for this very low risk to be appropriate.

This has once again increased the public’s skepticism towards AstraZeneca’s active ingredient. According to surveys, trust in the drug fell by around 20 percentage points.

In the federal state of Berlin, the population has a de facto choice of which vaccine they want to be administered. Whoever is invited by the authorities to vaccinate on the basis of the order of priority can choose the center in which this should take place.

Munich: In the middle of the Corona crisis: Tenants are thrown...

Germany emits too many CO2 emissions

Fight for the overall World Cup – Why Lara Gut-Behrami is... 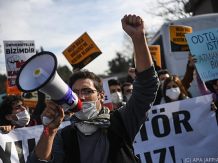 Again student protest against appointment of rector by Erdogan – politics...