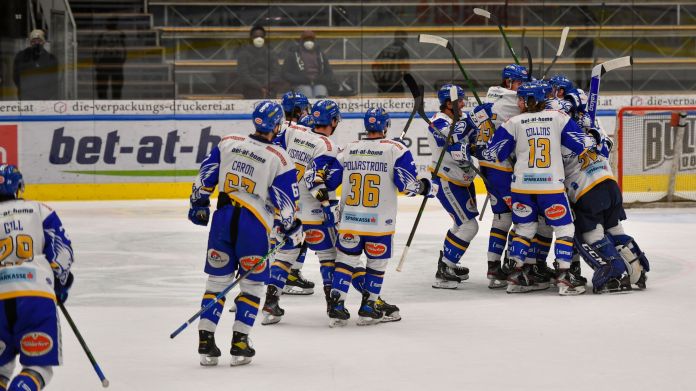 The long-distance duel between the VSV and Black Wings Linz for the last quarter-final ticket in the ICE ice hockey league brought pure drama. The Villach finally secured promotion in the penalty shootout. The Carinthians won 6: 5 in Dornbirn and caught the Black Wings. The Linz team won 5-3 in Graz and then had to watch on TV how the VSV made the comeback against the Bulldogs.

The next highlight for the VSV followed a few minutes after the game, as the quarter-finals against the KAC are on the program. The still reigning champion had the second choice in the pick and opted for the local rival. This is the first time in ten years there will be a Carinthian play-off duel, in the 2010/11 season the KAC prevailed 4-1 in the semi-finals.

VSV overslept the start against Dornbirn

In the Dornbirn exhibition hall, things didn’t go well for Villach at first. The VSV slept through the first third and was 0-2 behind in the first break. The following goal by Sahir Gill (22nd) was countered by Vorarlberg with a double strike to make it 4-1. Shortly thereafter, the decisive moments: With a controversial referee decision, a Dornbirn goal by Sam Antonitsch was denied, VSV coach Rob Daum woke his team in the 31st minute with a goalkeeper exchange (Alexander Schmidt for Jakub Sedlacek).

The VSV found new energy and reduced to 3: 4. Dornbirn pulled away again to 5: 3, but Jerry Pollastrone (48th) and Chris Collins (52nd) saved the Carinthians in extra time. In the penalty shootout, Pollastrone scored for the VSV, Scott Kosmachuk missed the first match puck before Gill brought the Villacher back into the lead. Goalkeeper Schmidt then succeeded against William Rapuzzi of the Save, who brought the VSV into the play-off.

Despite the defeat, Maric fools around with Haaland – that’s behind...

Sebastian Vettel: Does the AMR21 fit the driving style?

Checking acute stock market risks: crash dangers! Will the next...