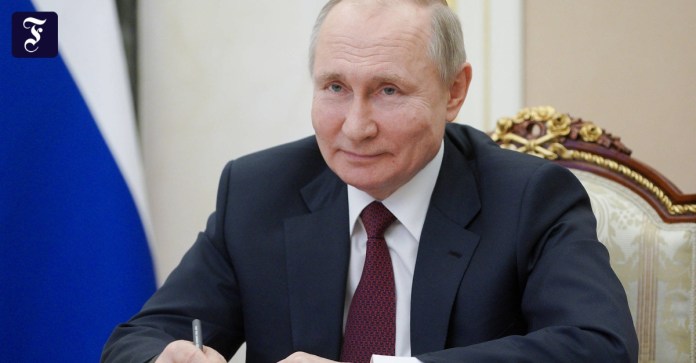 Dhe Russian President Vladimir Putin wished American President Joe Biden, who, according to a recent television interview, thinks he is a murderer, “healthy” on Thursday and indirectly described Biden himself as a murderer. You always transfer what you are yourself to someone else, Putin said in a video conference with representatives of the Ukrainian Crimea, which had been annexed seven years earlier. Putin’s spokesman had previously described Biden’s statement as “very bad” and unprecedented. Moscow, in response to Biden’s remarks, recalled its ambassador from the United States for consultations.

Biden’s testimony elicited numerous indignant expressions of loyalty to Putin in Russia’s political apparatus. “That part of the political elite that does not take a public position in support of Putin now risks being counted among the traitors sooner or later,” commented political scientist Alexei Chesnakov. Foreign policy expert Vladimir Frolov suspected that little would change in the American-Russian relationship: Biden’s strategy was to limit relations with Russia to a narrow selection of topics of interest to Washington; Biden himself cited the extension of the Treaty on the Limitation of Strategic Nuclear Weapons (New Start) as an example. But, according to Frolow, with the “killer” statement, Biden is sending the signal to other Western heads of state and government to also reduce their personal contacts with Putin.

The Russian Foreign Ministry announced on Wednesday that talks with Ambassador Antonov should focus on the question of how an “irreversible deterioration” in relations could be prevented. Deputy Foreign Minister Sergei Riabkov told RIA Novosti news agency that responsibility for the deterioration in relations “rests entirely with the United States”.

The US State Department said it had taken note of the Russian ambassador’s recall. A spokeswoman added that the American ambassador in Moscow will remain at his post despite the crisis in order to maintain “open communication channels” and “reduce the risk of misjudgments between our countries”.

Biden was asked in the interview with the broadcaster ABC News whether he was of the opinion that Putin “is a murderer”. The American President replied: “I do.” Biden did not give any details and did not make it clear whether he was referring to the attempted poisoning of the Kremlin critic Alexei Navalnyj. Biden also said in the interview that the Russian head of state will “pay” for trying to undermine his 2020 presidential candidacy.

On Tuesday, the American authorities published a new report according to which Russia also interfered in the US presidential election in 2020 – and not just in the 2016 election, which Biden’s predecessor Donald Trump had won.

Kremlin spokesman Dmitri Peskov rejected the report on the American election on Wednesday as “completely unfounded and unfounded”. “We consider this report to be false,” said Peskow. The Kremlin regretted the publication of the report, which should be used as an “excuse” for possible new sanctions against Moscow.

Moscow reacted immediately and sharply to Biden’s statements. “Putin is our president and an attack on him is an attack on our country,” wrote the President of the Russian House of Commons, Vyacheslav Volodin, in the Telegram online service.

White House spokeswoman Jen Psaki said on Wednesday, when asked by journalists whether Biden believed the Russian president was literally or figuratively a murderer, the American president was keeping his “concerns” about things he was doing Finding “bad or problematic”, not going back. As an example, she cited electoral interference, the poison attack on Navalnyj and cyberattacks.

Since taking office in January, Biden has taken a much tougher stance towards Moscow than Trump, who is accused of being overly close to the Kremlin chief.

Biden said he spoke to Putin shortly after he took office in January. “At the beginning of the conversation I said to him: ‘I know you and you know me. If I come to the conclusion that this has happened, be prepared for something. ‘”Biden did not elaborate on whether he meant electoral interference or other Russian practices such as the Navalnyj case. However, the American President affirmed that he wanted to “work” with Moscow “if it is in our common interest”.

The Salzkammergut also cycles in winter

Hessen: More garbage in Frankfurt because of Corona

Ankara swears revenge: PKK is said to have executed 13 Turks

Merkel bows to pressure before Corona summit: easing possible from 100...

Remaster of the PlayStation oldies for PS4, Switch and PC is...

Merkel in the Bundestag on the corona crisis: If the willingness...