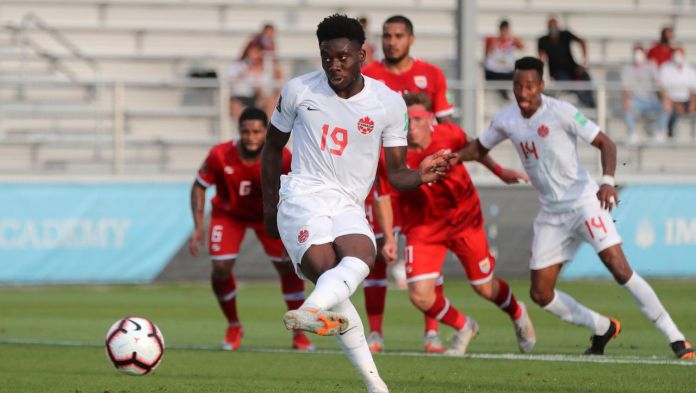 Alphonso Davies from FC Bayern Munich made history with the Canadian national soccer team. In qualifying for the World Cup, they scored 11-0 (6-0) against the Cayman Islands, number 193 in the FIFA world rankings. It was the Canadians’ highest international win to date.
Davies contributed to the record two goals. The 20-year-old defender scored in the 28th minute with a penalty and in the 73rd minute. Vancouver Whitecaps attacker Lucas Cavallini scored a hat trick within eight minutes of the second half.
“The players wanted to make a statement,” said coach John Herdman. One had »wanted to write history. That was an impressive achievement, ”added international Alistair Johnston. So far, an 8-0 win against the Virgin Islands in September 2018 was the greatest success in Canada’s international history.
Davies’ team leads its qualifying group B with six points from two games. In June it will continue on the way to the 2022 World Cup in Qatar against Aruba and Suriname. So far, the Canadians have only been able to qualify for a World Cup finals: in 1986 they were eliminated after the preliminary round after narrow defeats against France, Hungary and the USSR. For the 2026 tournament, Canada has already qualified as co-hosts alongside the USA and Mexico.

Fresh snow on Sunday too – road closures due to snow...

Long-Covid: is there a connection with herpes?

Brazil: Mother (23) goes to party while her three young children...

Alpine skiing: Goggia strikes back in the second descent