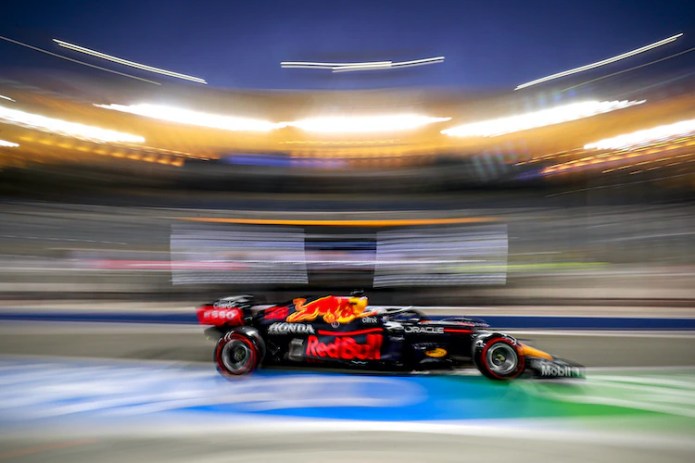 In the first qualifying of the new Formula 1 season, Red Bull Racing star Max Verstappen did exactly what was expected of him after three best practice times: He secured pole for the first round of the season in Bahrain.

Max Verstappen was in a good mood when he stepped into the Red Bull Racing pits before the first qualifying of the new season in Bahrain. The Dutchman had every reason to be. After all, he had finished all three training sessions in first place on the timesheet and thus established himself as the top favorite for pole position. Nevertheless, the former GP driver and later Sky Sports F1 expert Martin Brundle said: “This will be a very, very unpredictable qualifying.”

The outside temperature at the start of the final training session was 30 degrees, the track was still 35 degrees hot when George Russell, Mick Schumacher, Nikita Mazepin and Nicholas Latifi pulled out on the soft tires right from the start. The Haas drivers provided entertainment in the first few hours, the Formula 2 champion with the first lap time of 1: 33.861 min and the Russian with a spin in the 13th corner, during which his racer was undamaged. Nevertheless, the racing driver from Moscow headed for the pits straight away.

Mazepin was soon back on the runway and the rest of the pilots began their work, so that the track filled up quickly. With the exception of Schumacher, who stayed in the pits, all drivers were on the track ten minutes before the end of Q1 and it wasn’t long before the German Formula 1 rookie was passed on.

After everyone had made their first attempt, four Honda-powered drivers found themselves in the top 5 with Max Verstappen, Yuki Tsunoda, Pierre Gasly and Sergio Pérez. Only Lewis Hamilton made it into this group, third fastest behind Verstappen and Tsunoda and ahead of Gasly and Pérez.

Verstappen’s joy was marred by a trip in the second corner, during which he apparently damaged his underbody. The slow-motion repetition of the corresponding TV images proved that something flew off the 23-year-old Red Bull Racing star’s racer. He headed for the pits and stayed like Tsunoda in the pits. Hamilton pulled out again on used tires while Gasly stayed in the pits.

The rest of them tried again and Mazepin did another spin, after which he had to be content with the last place. Esteban Ocon (16th place), Latifi (P17), Sebastian Vettel (P18) and Schumacher (P19) also belonged to the first group of losers. “I’m pretty sure that both Ocon and Vettel were disturbed by the yellow flags from Mazepin,” commented Brundle, and the race management announced an investigation of the lap times that were set up during this phase for after qualifying.

Vettel missed the Q2 entry, however, by four tenths. Carlos Sainz, whose Ferrari engine suddenly switched off after a wild ride over the curbs in the second corner, was also angry. The Spaniard was lucky, he only just managed to get into Q2 in fifteenth place in Q1 and he also managed to get his racer running again.

At the start of the second qualifying segment, many drivers put out on medium-hard tires, including the Red Bull Racing drivers as well as the two Mercedes drivers, the McLaren drivers and the AlphaTauri talents. After the first lap, Hamilton led the field with 1: 30.085 min, thus distancing Verstappen by more than two tenths.

The experts wondered whether Mercedes had finally revealed its true potential or whether Verstappen’s underbody damage was responsible for the comparatively significant time difference between the two pole contenders. Meanwhile, Sergio Pérez and Daniel Ricciardo had to accept a cancellation of their lap times because they had disregarded the track limits.

But there was still enough time to improve and the Ferrari duo took the chance to take the lead, with Sainz being a thousandth of a second faster than Monegasse with 1: 30.009 min. Hamilton, Lando Norris, Valtteri Bottas, Ricciardo, Verstappen, Gasly, Alonso and Stroll completed the top 10 and thus also the Q3 group.

In the top 10 qualifying, after the first attempt, Max Verstappen took over the top position ahead of Hamilton, who was 23 thousandths slower. Behind them were Gasly, Bottas, Sainz, Stroll, Ricciardo and Norris in front of Leclerc and Alonso, who had not yet completed a timed lap. On the second attempt, Verstappen was able to add more and was happy about the pole, Hamilton completes the front row.

Semester report: Teacher with grades in a bind – Coronavirus Vienna

Frankfurt in the top ten in the city ranking for economic...

Six corona hotspots on the black warning level in Hesse