On the occasion of Queen Elizabeth II’s 95th birthday, the palace has now released a souvenir collection. There is also a gold-plated porcelain cup underneath.

On April 21, Queen Elizabeth II (94) celebrates her 95th birthday. For this solemn occasion, the palace has now released a special tea set as well as other souvenirs. The items are kept in a pink shade, which the Queen herself often wears, and white and gold dominate the pieces.

Queen Elizabeth: an elegant tea service in her honor

Among other things, there is a porcelain cup with a matching saucer for a whopping 65 pounds (around 75 euros). The tea service is refined with gold leaf and decorated with a rose decoration. The flowers are said to be reminiscent of those of the East Terrace Gardens in Windsor Castle, where the Queen currently resides with husband Prince Philip (99). This is reported by the British newspaper “Daily Mail”.

The collector’s items, including corgi pendants, tea towels and cookie jars, will be available in the Buckingham Palace online shop from March 27th and will also be sold in the Queen’s Gallery, Buckingham Palace shops and in royal souvenir shops as soon as they reopen due to Corona allowed to. 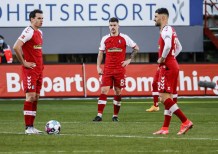 Vodafone: failure over? Customers complain about problems – and vent...