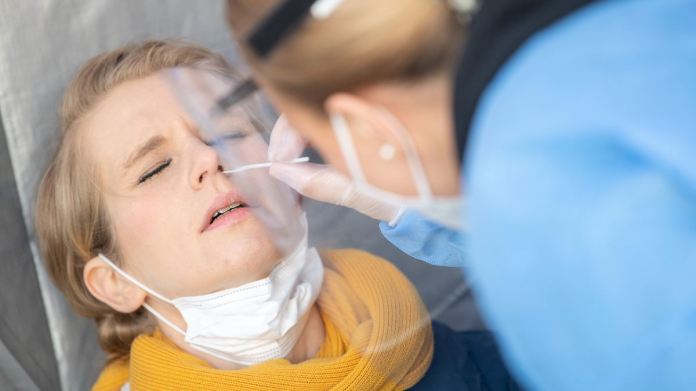 Next week there should be free quick tests for everyone, discounters will have home tests in their range from Saturday. What are they good for? What is the difference? Where do you get the free offer, where do you get the tests for at home and how do you deal with positive results?
Rapid tests are to play a central role in fighting pandemics in the future. Yesterday at the Prime Minister’s Conference it was decided to pay every citizen a weekly quick test from March 8th. At almost the same time, the sale of rapid tests for the home begins, among other things, they will be offered by the Aldi discounter from March 6th. What is the aim of the federal and state governments with this and why do you have to pay for one offer and not for the other, although there is no fundamental difference between the procedures in purely technical terms? There are many questions about the new rapid test strategy, but not yet for all the answers.

What can rapid tests do?

Rapid antigen tests detect proteins from the Sars-CoV-2 virus. They are not as sensitive as PCR tests, which jump on the genetic material, as they only react when there is a high viral load in the smear. This means that they will only show a positive result if a tested person is contagious. And because they do this in as little as 10 to 15 minutes, they are unbeatable when it comes to quickly determining if someone is infectious. In addition, rapid tests are much cheaper than PCR tests.

What are they good for?

With their advantages, rapid tests are very well suited to safeguarding situations where many people come together – especially indoors. This is especially true for face-to-face jobs, i.e. jobs that cannot be done in the home office. Rapid tests are already being used in nursing homes and sometimes in schools. In perspective, they can also be used for “freestyle” activities, for example to shop in retail stores or to visit cultural events.

What are they not suitable for?

For the same reasons, rapid antigen tests are not suitable for generally detecting a Covid 19 infection. Your result is only a snapshot. This means that a person who tests negative in the morning can be contagious in the evening. That is why you can only rely on a result for a few hours.

How reliable are the results?

They meet the minimum criteria set by the Paul Ehrlich Institute (PEI) in coordination with the Robert Koch Institute (RKI). This means, among other things, that you can detect more than 80 infections of at least 100 people with Covid 19 symptoms within seven days of the onset of symptoms (sensitivity). In addition, it must be ensured that they almost never produce false positives. This means that their specificity must be greater than 97 percent.

The quick tests are often even more precise, but you cannot rely on them one hundred percent and ignore AHA-L rules after a negative result, for example. This is especially true when there are very many infected people, i.e. the incidences are very high.

Where can I get tested for free?

This question still has to be finally clarified, although there is actually no more time for it. Basically, the free tests can also be carried out where you can currently be tested for a fee. These are mainly rapid test centers and pharmacies.

According to the Federal Association of German Pharmacists’ Associations (ABDA), around every tenth German pharmacy already offers antigen corona tests. A prerequisite for a free offer, however, is that they are commissioned by the public health service.

In addition, the question of costs still needs to be clarified. “The corresponding legal ordinance for the implementation of the test strategy must now be designed in such a way that testing in pharmacies works unbureaucratically and is economically feasible,” says ABDA President Gabriele Regina Overwiening.

The test centers are also generally ready to get started immediately if they are commissioned by the health authorities. Christoph Neumeier, founder of Covimedical, told ntv.de, however, that his company had not yet received an official request.

If this happens, there are still open questions to be clarified. In particular, fast and unbureaucratic billing must be guaranteed. Then the question of costs is not a problem either, Covimedical can carry out the tests with the appropriate volume at prices that are in the room. Most recently, the Ministry of Health calculated around 6 euros per rapid test plus 12 euros for a smear test and issuing a test certificate.

Will there be enough test offers on Monday?

Since the questions listed above still need to be clarified, this is not likely. Even if the basic procedure should be clear by then, the rapid tests procured by the Ministry of Health will hardly be able to be distributed that quickly. The pharmacies in particular will probably have to reorganize in order to be able to test more than before. This may also fail due to a lack of space and staff.

Are there enough rapid tests at all?

According to Hanno Kautz, press spokesman for the Federal Minister of Health, there is no shortage of rapid tests. “According to the manufacturer, 150 million rapid tests are already on the dump and can be delivered directly. The federal states and municipalities only have to call them up,” he said. “As of today, the federal government has secured at least 800 million rapid tests through bilateral declarations of intent and European framework agreements for this year. The actual market supply will far exceed this quota.”

What should be done if the result is positive?

If a test is positive, those affected should immediately isolate themselves in order to break the chains of infection. In addition, the result must be confirmed by a PCR test. Pharmacies or test centers are also obliged to report positive tests to the responsible health department. However, it is important to be proactive, as the process often takes too long. Among other things, messages are still being faxed.

Then why do you need self-tests?

How lay tests can be used sensibly is still being discussed. In the current planning of the federal and state governments, they are also mentioned as an opportunity to test yourself for shopping or visiting cultural events, for example. However, critics say that without controls the risk of cheating is too great. For example, how do you know that the test was carried out yourself?

Home tests can also be used to secure social contacts, for example visiting friends. Although this is actually not desired in terms of pandemic control, it is still better than meeting completely unprotected. It makes more sense to use self-tests for students who, after all, can hardly make a detour via pharmacies or test centers on the way to class.

Proponents see home tests as an important tool for finding infections that would normally go undetected – especially those that are asymptomatic. In this way, you could make a decisive contribution to reducing the number of cases. “If 50 percent of the population were to test themselves twice a week with self-tests and then isolate themselves immediately if the result was positive, the effect could be about as strong as the lockdown from mid-December 2020 to February 2021,” says Nik Kolb from the RapidTests.de initiative.

No, in contrast to the previously common rapid tests, you do not have to dig deep into the throat with the swab to take a smear. It is sufficient to take the sample in the anterior nasal area. The further procedure is also very simple; the manufacturers must enclose understandable instructions accordingly. ntv.de has tried one of the self-tests that have already been approved and can confirm this. In the future, spitting and gargling tests could also be permitted.

Where can I get the self-tests?

Aldi is already selling amateur quick tests on Saturday, other discounters want to follow shortly, and drug stores and supermarkets will soon be offering them. And of course they will be available in pharmacies.

What do they cost?

The self-tests are expected to cost between 5 and 10 euros per piece. Aldi sets the bar low here, in the branches 5-packs are sold for 25 euros.

Will the offer be big enough?

Here, too, the Federal Ministry of Health sees no bottlenecks. The federal government has already secured over 200 million self-tests, says press spokesman Kautz. Talks were ongoing with other manufacturers. “Here, too, the actual market supply will by far exceed the guaranteed quotas.”

The Ministry of Health originally recommended that the federal states allow low-threshold access for all citizens – if necessary for a small personal contribution of 1 euro. There is no longer any talk of this after the Prime Minister’s Conference. One can only guess why. Presumably the costs were shunned, although a broad deployment could be cheaper but just as effective as a lockdown.

What do you do if the test is positive?

Self-tests only make sense if people immediately put themselves into isolation if they get a positive result. Personal responsibility is even more important here, as no third party informs the health department. You also have to take care of getting a PCR test yourself. With a positive self-test you should get an appointment without any problems.

Are there already apps for quick tests?

It would be very useful if you could communicate self-test results to the health department via an app. And QR codes that are scanned in from the smartphone display would be more practical than paper certificates for a restaurant or theater visit.

On the one hand, the Luca app comes into question, but there is already the Corona warning app. It is not yet able to do this, but it will soon be upgraded accordingly. The federal government is working on the integration of event registration, says Hanno Kautz. It should “be available shortly after Easter. The principle: A QR code is generated for a specific event, which everyone scans with the app. No personal data is exchanged. But if someone tests positive and enters it into the app , everyone will be warned anonymously. “

That would have happened with Prince Philips’ death with the Oprah...

India: No Corona – but a mysterious disease has broken out