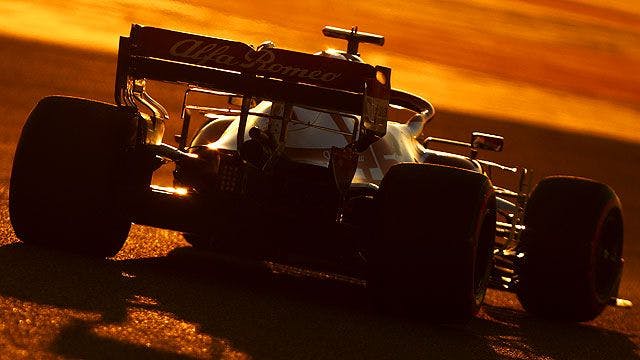 Alfa Romeo has presented its Formula 1 racing car for the 2021 season. The new company car of Kimi Räikkönen and Antonio Giovinazzi was unveiled at a glamorous ceremony in Warsaw.

23 Grand Prix in one Formula 1 year – more than ever. Despite the corona pandemic. An Englishman who wants to make history with his eighth title. A Spaniard who is returning … and yes, there is a Schumacher again. Everything you need to know to kick off the weekend.

There are no major changes to the cars. The teams only developed the cars from 2020 further. What is new is a well-known face: two-time world champion Fernando Alonso drives for Alpine. Incidentally, the former Renault racing team is not the only one with a new name and new outfit. Racing Point became Aston Martin. Sebastian Vettel is now driving there, Sergio Perez has switched to Red Bull. Daniel Ricciardo is accelerating for McLaren instead of Renault after Carlos Sainz Junior switched to Ferrari instead of Vettel.

New to the racing calendar – and not without public discussions – is Saudi Arabia. Something else is new in 2021: There are two safety cars. Aston Martin and Mercedes provide it this time. Once green, once bright red. They take turns.

Four of them have achieved 13 drivers’ titles. Lewis Hamilton: 7 World Cup successes, Sebastian Vettel 4, Fernando Alonso 2, Kimi Räikkönen 1. They are fan favorites, guys with rough edges, sometimes more, sometimes less. Hamilton, the record champion together with Michael Schumacher, who, in addition to his sporting insatiability, has long been characterized by his struggle for justice, against racism and for more diversity. Vettel, who wants to start again after seven untitled years at Aston Martin. Raikkonen, who can still boast of being the last Ferrari world champion, and Alonso, who once finished Michael Schumacher’s triumphant drives with Renault. Together, Hamilton (36), Vettel (33), Alonso (39) and Räikkönen (41) are 149 years old.

Hamilton: “The car is not as fast as last year”

The Formula 1 team Mercedes has presented the car for the coming World Cup season at the base in Brackley in Great Britain. World champion Lewis Hamilton can hardly wait to do the first few laps in it.

Mick Schumacher is undoubtedly the most prominent driver who will celebrate his racing premiere in Formula 1 in Bahrain. The only debutant is Michael Schumacher’s son, who turned 22 last Monday, but not. Nikita Masepin, also 22 years old, will compete with him in the Haas team. Last season they were opponents in Formula 2, which Mick Schumacher won. The Russian has often made a name for himself through negative headlines, father Dimitri is a billionaire and co-sponsor of the Haas team. Meanwhile, Yuki Tsunoda, a talent from Japan, joins Alpha Tauri. The 20-year-old made it from Japanese Formula 4 to Formula 1 in just three years.

Another Schumacher in Formula 1

Mick Schumacher is allowed to drive in Formula 1 like his father Michael. The Haas racing team signed the 21-year-old as a regular driver. But now the most difficult part of his career begins.

Sebastian Vettel’s retirement from Ferrari set things in motion. In order for the 33-year-old to be able to accelerate at Aston Martin, Sergio Perez had to leave the former Racing Point team. In the end, however, the Mexican found a job that Vettel already had: Perez switched to Red Bull, where Alexander Albon was out of the race after a disappointing season. Vettel’s place at Ferrari will be taken by Carlos Sainz Junior this year, while Australian Daniel Ricciardo moved from Renault to McLaren for the Spaniard.

Where to watch the races

At SRF, long-time Formula 1 commentator Michael Stäuble and, for the first time, Michael Weinmann took turns in live reporting in 2020. Former Formula 1 driver Marc Surer also appeared as an expert in selected races. It is still unclear whether this list will remain in place for 2021.

Swiss television will broadcast the qualifying sessions and races live up to and including 2022.

Pull out the agenda: the racing calendar

your opinion
Who will win the world title?

And if you have read this far, then there is a tip on your own as a reward

“This Formula 1 season was incredibly exciting, the documentary is a must”

Netflix hits the nail on the head once more. The new season of “Drive to Survive” takes a realistic look behind the scenes of the world’s largest auto racing event. Not only editor and fan Gianluca Izzo is blown away.

“Netflix just shines when it comes to storytelling, it’s awesome”

The Swiss Formula 1 legend Beat Zehnder, today’s Alfa-Sauber sports director, praises the work of Netflix – and its racing. The realism of the new season “Drive to Survive” is phenomenal.

Frankfurt: Another festival of love

Frankfurt am Main: Wrong drivers on the B 3 between Preungesheimer...

According to virologists, Covid will “never be normal like the flu”

Next hammer at the Corona summit: Now Spahn’s warning app is...