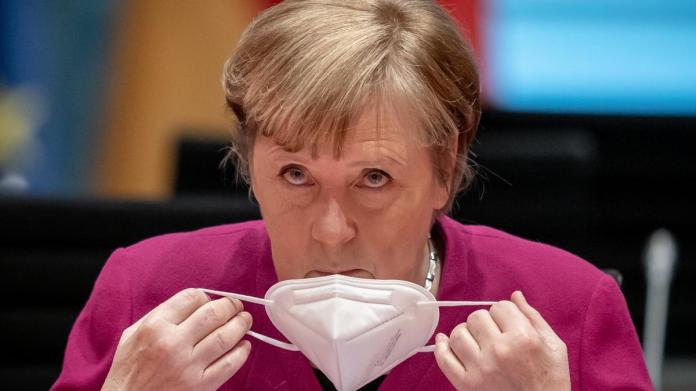 The conflict with business over compulsory testing for companies is now a top priority for the Chancellor. But the federal government canceled the crisis summit at short notice. The fronts in the dispute, which is of great importance for the easing plan, are hardening.

The top-level discussion should be about a contribution by the company to the planned expansion of the corona tests. Chancellor Angela Merkel (CDU) has made this process a top priority.

The federal government wants to set the economy so that companies have to have their employees tested. The economy rejects compulsory testing for several reasons. The trade unions are also critical of such an obligation.

“The economy has made a constructive and practicable offer to expand test capacities. It involves all companies – regardless of size and industry – in economically difficult times. Politicians still need advice – you can understand that well with this important topic, “said a spokeswoman for the Confederation of German Employers’ Associations (BDA) WELT. “We are still ready to support politics as far as we can. This is an expression of our responsibility to society as a whole. ”The BDA coordinates the associations in talks with the federal government.

After the meeting was canceled, the Federation of German Industries (BDI) criticized that “crucial questions for the federal government were open. It is particularly about legal and logistical issues, for example to what extent companies should and are allowed to report the test results to the health department. ”The BDI referred to a“ voluntary expansion of test offers ”in companies.

Above all, the SPD is putting pressure on the economy

An initial conversation between politics and business on Tuesday did not lead to a consensus. A crucial component for loosening lockdowns is an expansion of corona tests. The federal government wants to give everyone in the country a free weekly test. The companies should test their employees on their own and bear the costs.

The economy is resisting this: It is not possible for companies to set up a test structure for around 40 million employees. Corporations like Volkswagen are already running their own test strategy; However, compulsory testing is a challenge, especially for small and medium-sized companies.

In addition, the associations argue that the number of infections is manageable according to previous knowledge. Finally, there are legal concerns about mandatory testing. This would mean that employees would have to be tested, i.e. would have to allow an intervention on their body in the case of stick tests. And that cannot be legally regulated by means of an ordinance.

Despite the resistance from the business community, it cannot be assumed that the federal government will give up on the matter. The SPD in particular is exerting great pressure to ensure that companies are committed. Federal Finance Minister and SPD candidate for Chancellor Olaf Scholz had reminded business representatives in the round on Tuesday of the “bazooka” for the economy and billions of euros in government aid. Now it’s the company’s turn.

The parliamentary managing director of the SPD parliamentary group, Carsten Schneider, had made it clear: “An obligation on the part of business to test the workforce is the least I expect. We close the schools, but let production continue even in lockdown. It must be possible to test the employees at least once a week. At his own expense. ”He assumes that the business representatives are clear about these expectations and their social obligations.

Corona vaccination: With this tool you can calculate your personal vaccination...

Kate Middleton: Finally an addition to the family! Duchess Kate...

Fire in a nursing home in Stuttgart: three people have to...

Fist in the neck: Lionel Messi sees red for the first...