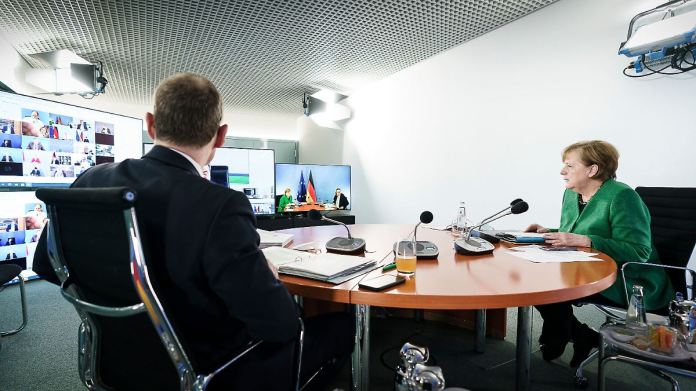 What the federal and state governments discuss at their meetings usually ends up in the media beforehand. A problem from the point of view of some politicians: Because of fear of being pierced, agreements are sometimes dispensed with in advance, according to a media report. This, in turn, has drastic consequences in some cases.
Politicians from various camps are dissatisfied with the way the federal and state governments are advising on the corona measures. Before meetings of the Prime Minister’s Conference there is a real fear of being stabbed, reports the “Frankfurter Allgemeine Sonntagszeitung” (FAS). That is the reason why agreements are partially dispensed with in advance. Some politicians even justify the wrong decision about the planned Easter rest, which the Chancellor had to withdraw. “Meetings are as permeable as Swiss cheese,” said Hesse’s State Chancellor Axel Wintermeyer from the FAS CDU. “All preliminary papers and preliminary considerations are published almost simultaneously in certain media. This contributes to the fact that no specific papers are put on the table beforehand.”

Thuringia’s Prime Minister Bodo Ramelow of the Left Party had made similar statements to the FAS and other media. The Easter rest is an example of the malfunction of the meetings. “If the topic had been written on a piece of paper beforehand, it would have been pierced and talked through beforehand. It didn’t appear on any piece of paper and was therefore not adequately checked. This was the first time we had the situation that we had decided something that had not been checked which turned out to be legally untenable. ”

The Minister-President of Rhineland-Palatinate, Malu Dreyer of the SPD, cited the reason for the piercing that the politicians had to consult on the screen. “Before Corona, we sat at a prime ministerial conference with the Chancellor in a room without employees. That seldom leaked out. Today we have a virtual meeting and don’t even know exactly who is there and is listening.”

Indiscretions on an unprecedented scale

Politicians report that the indiscretions exceed much of what they are used to in politics. “A weekly newspaper had a verbatim transcript where I assume that someone there is using his cell phone,” said Ramelow. Once when he was outraged reading a text message in which a tabloid journalist asked him to divulge information, the journalist promptly complained to him. Apparently he had heard every word. Wintermeyer suspects that journalists are even seeing video images. “What really annoys me is that it is not only the sound that is being transferred to the media, but also the visuals.”

Because the public is also informed about intermediate results, politicians complain about a harmful dynamic. “People do not always understand how a negotiation works. It is very complex, it involves a lot of detailed questions. If people are constantly being supplied with intermediate results, they have the feeling that politicians do not know what they want,” said Wintermeyer . Vice Chancellor Olaf Scholz from the SPD also sees the problem. In an interview with the FAS, he said that he did not like “that the round can no longer meet in the necessary confidentiality and that intermediate results are leaked out”.

After contract termination: Marc Hirschi moves to Emirates – including a... Terzic wants to push the record scorer Moukoko “to his limit”

Victory for the red jackets: KAC triumphs against South Tyrol in...