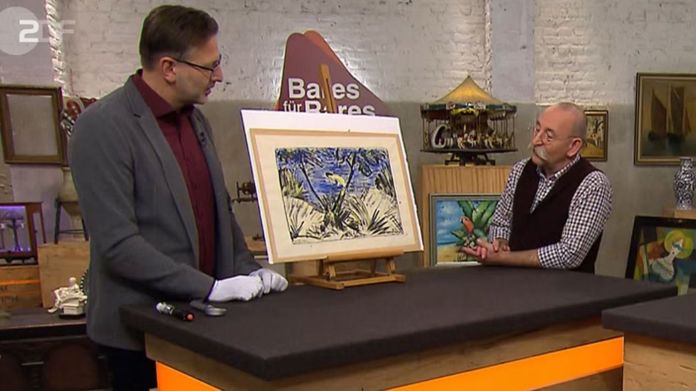 ZDF junk show
Record for “Bares for Rares”: This is what is happening now with the 30,500 euro painting

This painting writes “Bares für Rares” history: Detlev Kümmel and Horst Lichter talk about the lithography by painter Otto Müller, which will bring in 30,500 euros.
© ZDF

Record sales at “Bares für Rares”: Fabian Kahl bought a painting for 30,500 euros. Behind the scenes, the work of art caused nervousness among the experts – and a total failure at host lights.

Record sales on “Bares für Rares”: Fabian Kahl paid a proud 30,500 euros on Tuesday in the ZDF junk show for a painting by Otto Müller. It is the third most expensive item that ever changed hands on the show. When it became clear how valuable the lithograph, which had been lying in an attic for years, was, the excitement behind the scenes was great.

“I never expected that we would ever have a work by Otto Müller on the show,” said “Bares für Rares” expert Detlev Kümmel after the record sale in a video published on Facebook. He was very proud that he was the one who was allowed to research the picture. “It was really work, because you can’t make a mistake here,” explained the gallery owner from Lüdenscheid. He was very nervous.

Moderator Horst Lichter, on the other hand, admitted to not having recognized the value of the property at first. “If you had asked me beforehand what the picture is worth – because I didn’t know Otto Müller at all – I would have said 1500 euros,” admits the 59-year-old. When he heard the estimate for the lithograph, he first “ate a chocolate bar” afterwards.

Saleswoman Marlies Fischer came to “Bares für Rares” on behalf of her friend. Fischer reported that the elderly lady kept Otto Müller’s work of art in the attic for years. The Duisburg native named 10,000 euros as the desired price. When Kümmel valued the colored lithograph at 30,000 to 35,000 euros, Fischer burst into tears. “This is insane,” she said.

Fabian Kahl finally bought the Müller for 30,500 euros. “I actually set myself a limit of 25,000 euros, but then I listened to my gut instinct,” said the Thuringian art and antiques dealer after the purchase. It was his highest buy on Bares for Rares. “Otto Müller is one of the greatest artists in the ‘Brücke’ group and my favorite,” he said. Kahl left it open whether he would keep the work or sell it. First he wants to have a UV protective frame made to protect it from fading.

With his 30,500 euro purchase, Kahl goes down in “Bares for Rares” history. It is the third most expensive item sold in the show. For 42,000 euros, the most expensive object to date at “Bares für Rares” changed hands on May 22, 2019: Susanne Steiger bought a relic – a golden pectoral with the alleged splinter from the cross of Jesus that had been sealed by the Pope – for a proud 42,000 euros. In 2014, Wolfgang Pauritsch bought a Borgward Isabella for 35,000.

Source: “Bares für Rares” from March 23, 2021. New episodes of the junk show can be seen from Monday to Friday at 3:05 p.m. on ZDF and in advance in the media library.