Bunnyhug (developer) and Coatsink (publisher) announced Moonglow Bay at yesterday’s Xbox Indie Showcase. In the adventure you play a hobby angler and work on perfecting your fishing skills, reuniting the community of a remote town and forging relationships. It should appear later this year for PC (Steam), Xbox One, Xbox Series X / S and in Xbox Game Pass.
Moonglow Bay is set on Canada’s east coast in the 1980s and promises an “emotional story” that is said to be linked to a relaxing fishing role-playing game. The developers advertise the angel aspects with the predicate “realistic”. You control a hobby angler who tries to fulfill the last will of his partner and save a company from bankruptcy. So you have to catch fish, prepare the catch and then sell it to improve the shop, equipment and boat. Moonglow Bay can be played alone or in local co-op (with drop-in-drop-out).

The product description goes on to say: “The game combines playful voxel graphics with a wonderful soundtrack and your journey is divided into several arcs that take you to a lively town where you have the chance to meet the mystical monsters of Moonglow. With a diary and fishing rod in the Explore the ocean by hand – from icy glaciers to boiling geysers – and learn to cast nets, set traps and fish through the ice sheet to discover over 100 species of aquatic life and unlock the secrets of Moonglow Bay. ”

Pfizer-Biontech: Only half of the vaccine available – economy

Coronavirus in Berlin: The first vaccination doses have been destroyed in... 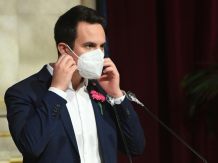