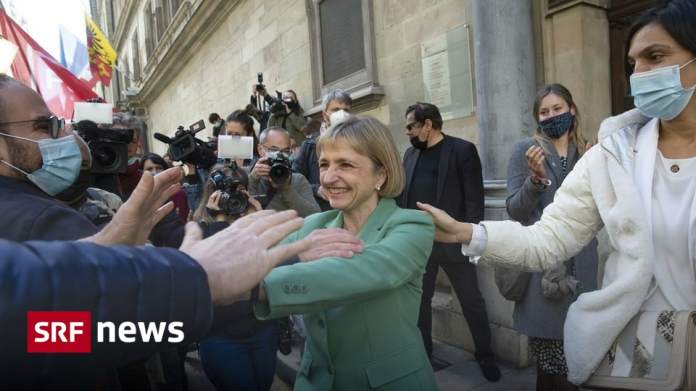 In the second round of replacement elections in the Geneva State Council, four candidates fought for a seat. Given the unity of the left parties, the Green Fabienne Fischer seemed to have the best chance of making the race. The 59-year-old lawyer was able to count with the support of the Social Democrats and the Labor Party. After counting the votes in letters, which make up around 90 to 95 percent of all votes, the prognosis was confirmed.

Geneva moves to the left

The 59-year-old lawyer believes that she is the right person to give the institutions the legitimacy they need – after the affair of a luxury paid trip from Maudet to Abu Dhabi has preoccupied Geneva politicians for almost three years.

Numerous supporters came to the town hall in Geneva’s old town to applaud fishermen. With Fischer’s election, the majority of the State Council swings to the left. “It is now possible to change course,” said Fischer. You can imagine any department, she added.

Pierre Maudet, the resigned State Councilor who ran for his own successor, could not catch up in the second ballot and admitted his defeat shortly after the first results were announced in a letter to Geneva that he circulated on Twitter.

“I take note of today’s result and the decision of the electorate, and I congratulate the green candidate on her election to the Council of State. I would like to thank the people of Geneva from the bottom of my heart who have placed their trust in me. ”Maudet also wrote that a new era had dawned for him, one of retreat and reflection.

But he doesn’t want to say goodbye to politics. “I will continue my political activity, probably in a different way,” he later said in a brief statement to the media.

The 43-year-old Pierre Maudet has had a steep political career that is now coming to an abrupt end. For years he was considered a political child prodigy and hope for freedom in French-speaking Switzerland.

At the age of 21 he was elected to represent the FDP in the Geneva city parliament. From 2003 to 2007 he was president of the FDP of the city of Geneva and then of the cantonal party. At the age of just 29, he was elected to the cantonal government in 2012. In 2017 Maudet was defeated by then Ticino party colleague Ignazio Cassis in the Federal Council election to succeed Didier Burkhalter.

A first critical article about his trip to Abu Dhabi was published in May 2018, and a month later the cantonal parliament passed a resolution condemning the acceptance of the luxurious gift. In September he was relieved of his duties by his government colleagues, he was provisionally relinquishing the Presidency of the State Council. Shortly afterwards, his immunity is withdrawn. In July 2020 he will be expelled from the FDP Geneva. In October Maudet announced his resignation from the State Council to run for his own successor. on February 22, 2021 he was convicted of taking advantage of his trip. After the 1st ballot on March 7th, Maudet is also subject to the substitute elections for the Council of State of the Greens Fabienne Fischer in the 2nd ballot.

He continues to make himself available for the canton. Everything is open. He now wants to take time to think about it with his family, said the 43-year-old.

National Councilor Yves Nidegger stayed in the running for the SVP. In the postal vote, however, this only won 12,104 votes. Ahead of him is the party president of the Geneva-based CVP Delphine Bachmann, who received 14,717 votes by letter.

Mbappe thanks Tuchel for his tenure at PSG

Tokyo 2020: Bach on Olympics without foreign spectators – “A necessary...

France and Norway on course for the quarter-finals