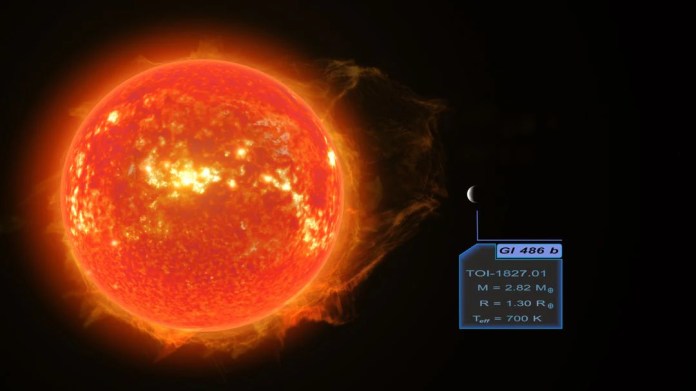 Astronomers have discovered a planet that could serve as a prime example for studying the atmospheres of Earth-like worlds. Gliese 486b orbits a red dwarf star only 26 light years away and presumably resembles Venus, as an international research team reports in the journal Science. Its short distance from Earth, its temperature and the orientation of its orbit make the exoplanet an ideal candidate for observations with future large telescopes, according to the scientists.

“The discovery of Gliese 486b is a stroke of luck,” says co-author José Caballero from the Center for Astrobiology in Madrid. “A hundred degrees hotter and the entire surface would be lava – its atmosphere would consist of evaporated rock. If, on the other hand, Gliese 486b were a hundred degrees colder, it would be unsuitable for follow-up observations. ” Because then the atmosphere of the planet would emit too little radiation for an investigation.

Astronomers have now discovered over 4,600 planets in other stars, including many rocky planets similar to the inner planets of our solar system. These also include worlds that move their orbit in the life-friendly zone around their central star – i.e. where temperatures are moderate and liquid water is possible on the surface. For such planets in particular, researchers are developing models for the atmosphere in order to be able to better assess whether there could actually be life there. The problem: The scientists have not yet been able to check their models because too little is known about the distant worlds. Gliese 486b could be a first step in changing this.

Astronomers have already determined the size and mass of tile 486b

Astronomers use two methods in particular to find planets in other stars: On the one hand, they look for slight staggering movements of stars, triggered by the gravitational pull of planets. On the other hand, the researchers monitor the brightness of a large number of stars in search of regular fluctuations caused by planets passing in front of the stars.

Gliese 486b is one of the few planets that can be detected with both methods. Therefore, astronomers were able to determine not only its orbit, but also its size and mass. The planet orbits its small, red central star every day and a half in a very narrow orbit. It has about 2.8 times the mass of the earth and is about 30 percent larger than our home planet. From the size and mass of the planet, the researchers conclude that it has a similar structure to the earth, i.e. consists of rock with an iron core. Astronomers call such massive rock planets super-earths, but Gliese 486b is more like a super-Venus with a surface temperature of around 426 degrees Celsius.

New telescopes could provide information about the composition and properties

Although this heat is too great for liquid water, it offers the chance that the planet, like Venus, will have a dense, easily observable atmosphere. The astronomers could then use future instruments such as the James Webb Space Telescope from NASA and the Extremely Large Telescope from the European Southern Observatory (Eso) to measure what proportion of starlight the atmosphere absorbs and at what wavelengths it shines – and something about its composition and Experience the nature.

“We can hardly wait until the new telescopes are available,” says Trifon Trifonov from the Max Planck Institute for Astronomy in Heidelberg, who played a key role in the discovery of Gliese 486b. “The results will help us to understand how well rocky planets can hold their atmospheres, what the gas envelopes are made of and how they influence the distribution of energy on the planet.”

The Mebis learning platform fails at the start of the lockdown

Corona vaccinations in Germany: Everything about the vaccination summit with Jens...

The municipality closes Semmering to tobogganers