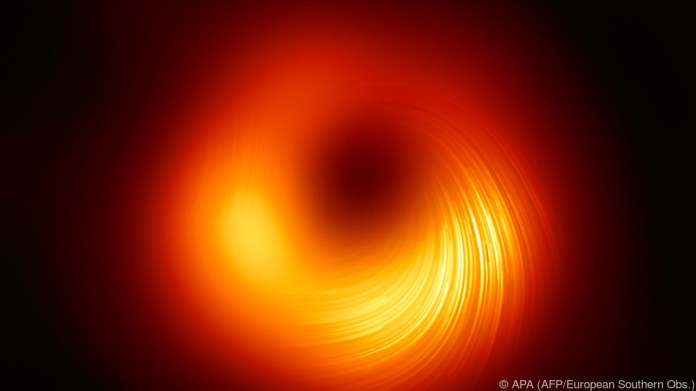 About two years ago, researchers published the image of a black hole for the first time. Now they have taken a further step in investigating the gravity monster in the distant galaxy Messier 87 (M87). For the first time, magnetic fields in the immediate vicinity of the black hole could be detected and made visible, as announced by the Max Planck Institute for Radio Astronomy in Bonn.

The lines mark the direction of polarization

“This is very important for us. It enables us to better understand how the luminous structures in the vicinity of a black hole are created,” explained Anton Zensus, director at the institute.

Better understanding of the jets

Magnetic fields, in turn, play a crucial role in the formation of so-called jets. The reason for this is that black holes absorb large amounts of matter. However, some of this matter does not fall into the black hole, but is shot out into space as super-hot plasma. “If we map the immediate vicinity of the black hole and also understand the magnetic fields, we can ultimately begin to understand how these jets are created,” explained Anton Zensus. “We are measuring something that will be important for the interpretation of the jets.”

Winter start with snow and slippery weather: Weather sticks to the...

Eder in the mass start of Antholz eight – JT Boe...

Fight against the coronavirus in Stuttgart: is the mask issue delayed?...