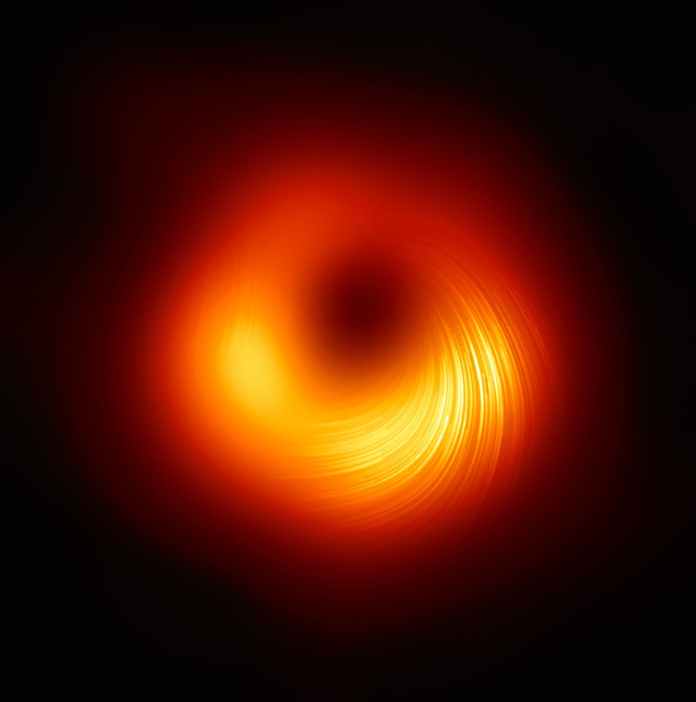 The first image of a black hole photographed by researchers caused a sensation in 2019: Now the experts have taken a close look at its magnetic fields

About two years ago researchers published the image of a black hole for the first time.

Now they have taken a further step in investigating the gravity monster in the distant galaxy Messier 87 (M87).

For the first time, magnetic fields in the immediate vicinity of the black hole could be detected and made visible, as announced by the Max Planck Institute for Radio Astronomy in Bonn. «That is very important to us. This enables us to better understand how the luminous structures are created in the vicinity of a black hole, ”explained Anton Zensus, director at the institute.

The data once again come from the “Event Horizon Telescope” (EHT), for which scientists have interconnected various radio telescopes around the world. In 2019, the EHT provided the first image of a black hole – a scientific sensation. The evaluation of the data has continued since then. The EHT observations now show the first image of the magnetic field distribution in the bright ring around the so-called shadow of the black hole in the center of M87.

Magnetic fields, in turn, play a crucial role in the formation of so-called jets. The background to this is that black holes absorb large amounts of matter. However, some of this matter does not fall into the black hole, but is shot out into space as super-hot plasma. “If we map the immediate vicinity of the black hole and also understand the magnetic fields, we can ultimately begin to understand how these jets are formed,” explained Anton Zensus. “We are measuring something that will be important for the interpretation of the jets.”

Rabbi goes for a New Year’s walk: when he meets a...

GoT star also there: Sex Pistols go into series production thanks...

Princess Eugenie: The baby is here!