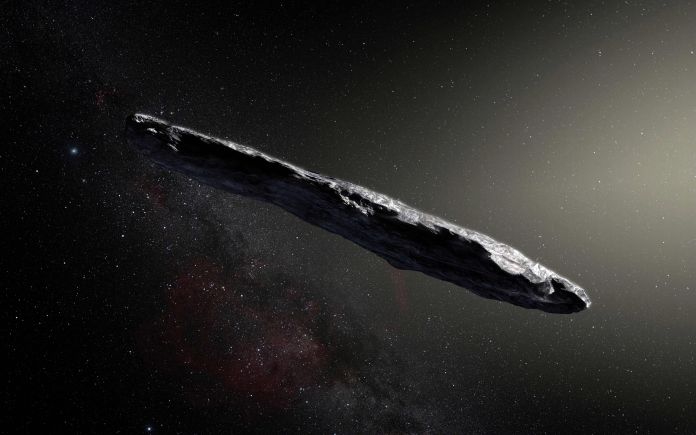 The celestial body ‘Oumuamua, which was discovered in our solar system in 2017, is still a mystery.

In October 2017, an observatory in Hawaii saw the celestial body ‘Oumuamua for the first time. It caused confusion: the cigar-shaped lump does not behave like a typical interstellar object, said Harvard professor Avi Loeb. It looks like the work of an extraterrestrial civilization. Researchers also noticed that ‘Oumuamua does not emit gas or dust, as asteroids normally do.

Alan Jackson and Steven Desch from Arizona State University in the USA have now found a new explanation: ‘Oumuamua is probably a fragment of an exoplanet that could have been formed in a collision with an asteroid. The researchers represent this thesis in two studies that they published in the journal “Journal of Geophysical Research: Planets”, writes the “Spiegel”.

“If the conclusions are correct, that would be an important milestone in astronomy,” writes Spiegel Online. The researchers then observed a fragment of an exoplanet for the first time in 2017.

By the way, Jackson and Desch now assume that ‘Oumuamua comes from an exo-Pluto. The collision took place about half a billion years ago and released the cigar-shaped splinter into space. ‘Oumuamua is said to be made of frozen nitrogen that has already melted on the outside.

Crisis is coming to a head: will the lockdown be extended...

Fire brigade in Stuttgart: injured in fire on psychiatric toilet –...

Royale Christmas Cards: These photos are a real gift – royals

Cryptocurrency more valuable than ever