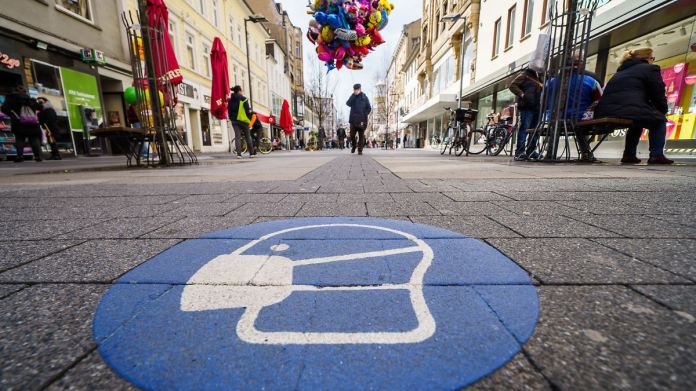 RKI: Over 17,000 new infections
The incidence in Germany is almost 130

The upward trend in new infections continues: with over 17,000 new cases, around a quarter more are reported to the RKI than a week ago. There is only a little hope when looking at the number of newly reported deaths.
The third corona wave continues, in Germany there is no improvement in the infection situation in sight. The health authorities in Germany reported 17,176 new corona infections to the Robert Koch Institute (RKI) on Saturday; last week the number was 13,733 – in direct comparison, an increase of 3443 cases or around 25 percent. The data reflect the status of the RKI dashboard from 6 a.m., subsequent changes or additions to the RKI are possible.

However, there is still a slight downward trend in deaths: 90 new deaths were reported to the RKI within 24 hours. Exactly a week ago, the RKI had recorded 99 new deaths within one day.

According to the RKI, the seven-day incidence was last at 129.7, as can be seen from the numbers. This is the highest value since January 19, in other words for more than two months. On Saturday, the nationwide incidence value was 124.9 new infections per 100,000 inhabitants within a week and on Sunday of last week it was 103.9. The seven-day incidence indicates the number of new infections per 100,000 inhabitants and week and is an important indicator for the course of the pandemic.

In the case of new infections registered within 24 hours, the highest value was reached on December 18 with 33,777 – but it contained 3500 late reports. The RKI has counted 2,772,401 detected infections with Sars-CoV-2 in Germany since the beginning of the pandemic. The actual total number is likely to be significantly higher, as many infections are not detected. The RKI stated the number of people recovered at around 2.5 million.

The high of 1,244 newly reported deaths was reached on January 14th. With the most recently reported 90 new deaths, the total number of people who died with or with the involvement of a proven infection with Sars-CoV-2 rose to 75,870.

Bavaria: Controls at the border with Tyrol and the Czech Republic:...

Coronavirus protection: a simple trick can increase it

First tests on people: Volunteers infected with Corona – miscellaneous from...

Ravens at Steelers live on ran.de on Wednesday