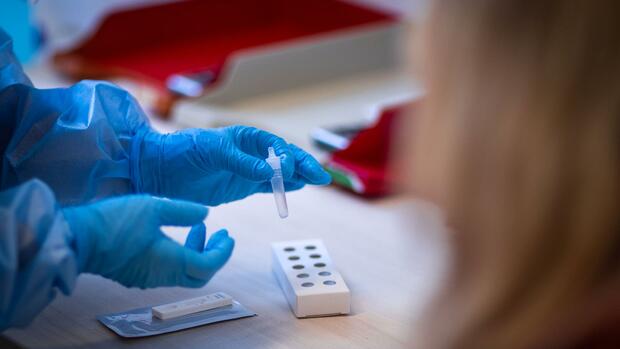 In many test centers, residents can have themselves tested for possible infection with the coronavirus with a free rapid test.

Berlin The seven-day incidence in Germany continues to rise. Most recently, the value of new corona infections per 100,000 inhabitants within a week, according to the Robert Koch Institute (RKI), was 129.7, as shown by figures from Sunday morning.

This means that the value is no longer as high as it has been since January 19 (131.5). The data reflect the status of the RKI dashboard from 7.35 a.m., subsequent changes or additions to the RKI are possible.

On Saturday the RKI had given the incidence as 124.9, on Friday with 119.1. The value is an important key figure for the course of the pandemic. A week ago it had passed the 100 mark.

After the number of new infections fell significantly in lockdown by around mid-February, the number of infections recently rose sharply again – which experts also attribute to the widespread use of more contagious variants.

The health authorities in Germany reported 17,176 cases to the RKI within one day, the day before there were 20,472 new corona infections. The last 90 deaths were recorded within 24 hours.

Exactly one week ago, 13,733 new infections and 99 deaths were reported within one day. The number of cases reported by the RKI is usually lower on Sundays, among other things because fewer tests are carried out on the weekend.

The RKI has counted 2,772,401 detected infections with Sars-CoV-2 in Germany since the beginning of the corona pandemic. The actual total number is likely to be significantly higher, as many infections are not detected.

According to the RKI, the number of those who have recovered is 2,484,600. The total number of people who died with or with a proven infection with Sars-CoV-2 rose to 75,870.

According to the RKI situation report on Saturday evening, the nationwide seven-day R-value was 1.19 (previous day 1.14). This means that 100 infected people infect an additional 119 people.

The value represents the occurrence of the infection 8 to 16 days ago. If it is below 1 for a longer period of time, the infection process subsides; if it is consistently higher, the number of cases increases.

The Robert Koch Institute (RKI) is an independent higher federal authority. It is a public health facility and monitors the health of the entire population of Germany. Another central area of ​​the RKI is research; the institute is the central research facility of the Federal Republic of Germany.

The Robert Koch Institute continuously records the current Covid-19 situation. It evaluates all information on the basis of current surveys and estimates the risk for the population in Germany. The RKI regularly announces the current number of corona cases in Germany.

The health authorities receive figures on new infections, recoveries or deaths from all over Germany and transmit them to the RKI. The offices have to adhere to strict rules.

Covid-19 cases that meet the RKI case definition must be electronically transmitted by the responsible health department to the responsible state authority by the next working day at the latest.

From there, the information must be transmitted to the RKI no later than the next working day. This data may not contain the name, place of residence or contact details of the persons concerned.

More: You can find the latest developments in our news blog

AstraZeneca vaccination: Death of a nurse in Austria – connection confirmed...

School in Kilchberg and Horgen – Corona cases at the school...

Paolo Ciabatti: Marquez can fight for victory in Doha / MotoGP