Robert Lewandowski will not be available to Munich for around four weeks due to a ligament stretch in his right knee. The club announced on Tuesday.

Lewandowski was injured in the 3-0 victory of the Polish national team against Andorra and traveled back to Munich early. There he received the bitter diagnosis.

The striker, who has already scored 35 times in the Bundesliga this season, will not only miss the top game against RB Leipzig on Saturday, but also the two quarter-finals in the Champions League against Paris Saint-Germain.

With his 35 Bundesliga goals, the 32-year-old was well on the way to breaking the “eternal” record of Gerd Müller, who scored 40 goals for the German record champions in the 1971/72 season. (The Bundesliga match schedule)

Starting from a four-week break, Lewandowski would only have the three final games against Borussia Mönchengladbach, SC Freiburg and FC Augsburg to catch up with or overtake Müller.

Andorra’s defender Albert Alavedra Jimenez landed on Lewandowski’s leg in the penalty area on Sunday. After being substituted on, Lewandowski’s right knee was immediately cooled and bandaged. (The tables of the World Cup qualification)

“My heart just stopped, I just hope that not much has happened,” said Bayern honorary president Uli Hoeneß in his role as RTL-Expert.

The Polish association was initially optimistic and forecast a downtime of “five to ten days”.

But now everything turned out differently. To the chagrin of Bavaria.

Gnabry or Choupo-Moting for Lewandowski?

The question that now arises: who can replace him?

The first candidate would be Eric Maxim Choupo-Moting, who was signed in the fall for precisely such cases and who was recently used regularly as a joker. The 32-year-old, who has scored five times in 24 competitive games, could start in the Bundesliga for the fifth time.

Choupo-Moting has so far fulfilled its role as a backup very well, and Bayern want the contract that expires in the summer SPORT1– Extend information.

But Hansi Flick has other options. Serge Gnabry could – as currently under Joachim Löw with the national team – move from the wing to the center and slip into the role of the wrong nine. Thomas Müller would also be a candidate for the striker, but is currently in impressive shape as a hanging tip. With 14 assists, Müller is the best assists in the league.

How will Flick decide?

VfGH lifts the ban on euthanasia

Chauffeurs for members of the Bundestag drive for low wages 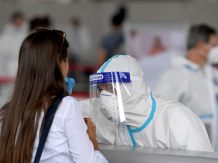 Protests against closure of shops in Brazil – world –