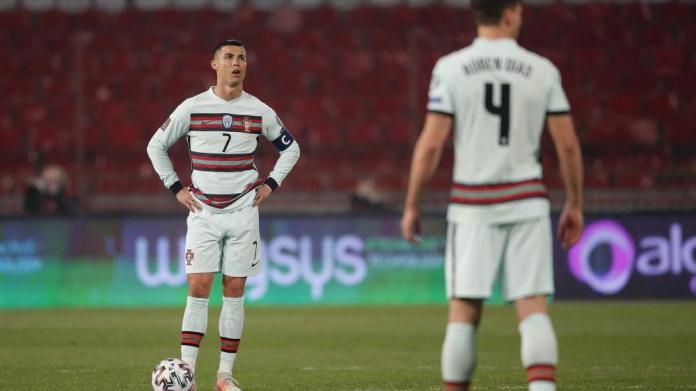 Shortly after the goal theft and the missed victory as a result, soccer superstar Cristiano Ronaldo had his head free again for a message to the nation.

Especially in difficult times you have to face the next challenge, said the captain of the Portuguese national team on social media late on Saturday evening. The 36-year-old said he had the feeling that an entire nation was injured.

Portugal’s selection in the World Cup qualifier in Serbia scored 2-2 (2-0), at least, but Ronaldo wasn’t angry because of the playful 2-0 lead. But about this one scene of the game in Belgrade, exactly after 2:51 minutes of stoppage time, when he scored the alleged 3-2 winning goal for the guests. But the Dutch referee Danny Makkelie did not give the goal.

Ronaldo scores – and gets yellow

After a wide cross, ball artist Ronaldo volleyed the ball half right just before the baseline, the ball rolled over the line – and was fully behind it. This was also shown by the often repeated TV pictures. The Portuguese were already cheering, but Makkelie let the game continue. No goal – but yellow for the frustrated and protesting Ronaldo! The superstar later stormed off the lawn furiously, throwing off the dark blue captain’s armband. But that was by no means meant symbolically. Because being the captain of the Portuguese team is the greatest pride and privilege of his life, assured Ronaldo.

This is what the dragons look like in the GoT prequel

Corona myths: a strong immune system is not enough

International specialists like to work in Austria – albeit virtually