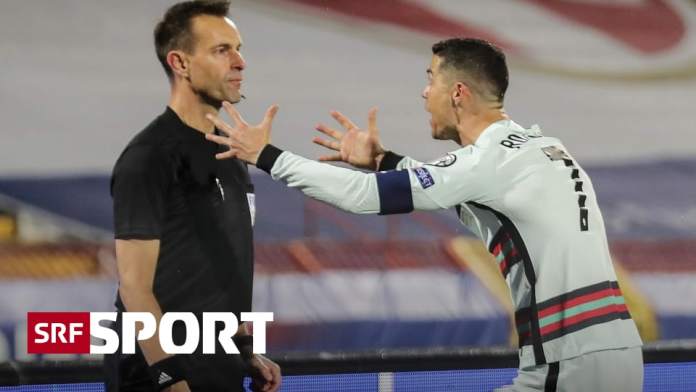 Group A: Portugal give away a 2-goal lead

Portugal’s 2 goals from Liverpool’s Diogo Jota were not enough to beat Serbia. In the second half, Filip Kostic and Aleksandar Mitrovic made up for the 2-0 break with his third goal in this qualification. In added time, Cristiano Ronaldo could have become the match winner. He scored the alleged 3-2, which was not given because the referees assumed that the ball was not behind the goal line. The team could not fall back on technical aids in the tight decision. There is no VAR in qualification. Ronaldo was furious.

Ireland suffered an embarrassment in Dublin. The home team was defeated by football dwarf Luxembourg 0: 1. The golden gate fell just before the end. In the 85th minute, Gerson Rodrigues scored the much-acclaimed winner.

Turkey also took its hunger for goals to Norway. After the 4 hits against the Netherlands during the week it was their 3rd in Scandinavia. Ozan Tufan advanced to the match winner of the European Championship group opponent Switzerland with a double (4th / 59th), Caglar Söyüncü was responsible for the 2-0 in the meantime. Before the kick-off, the Norwegians protested against Qatar as World Cup hosts.

The Netherlands have rehabilitated themselves from the 2-4 defeat against Turkey at the beginning of the qualification. In front of 5000 spectators, “Oranje” defeated Latvia deservedly 2-0 in Amsterdam. Steven Berghuis (32nd) and Luuk de Jong (69th) won. The game was led by referee Stephanie Frappart from France, who was the first woman in the world to whistle a game in the men’s World Cup qualification. Like the Norwegians, the Dutch are also taking a stand against the human rights situation in Qatar.

The Montenegrins also made the second group game victorious. At home against Gibraltar the result was 4: 1. It could have been significantly higher, as Montenegro had 31 degrees.

The Czech Republic and Belgium did not find a winner among themselves. The two nations that were able to make their first group games victorious separated 1: 1 in Prague. Romelu Lukaku responded 10 minutes later to Lukas Prodov’s opening goal (50th).

The Estonians trained by Thomas Häberli suffered their second defeat in the second qualifying game. After the 2: 6 against the Czech Republic, Estonia couldn’t win anything in Belarus either. Häberli was again unable to attend the game in the coaching bench due to a corona case in the staff.

Winter gloves do not protect against corona

New government in Yemen sworn in – power struggle to be...

“There must be no mistake”: Berlin is planning a new anti-terror...

Tourism – Stuttgart – summer half year: Tourism weak as it...