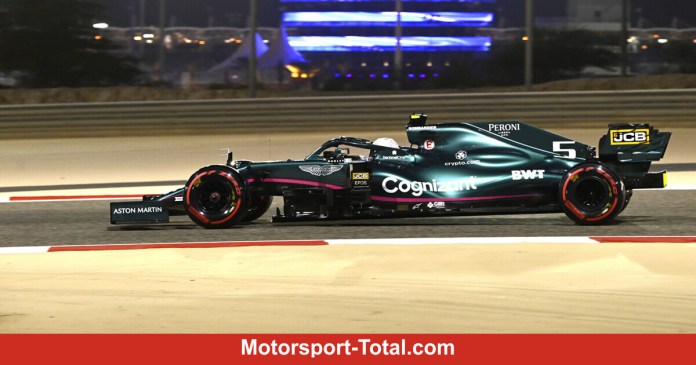 (Motorsport-Total.com) – The thesis seems to be solidifying: Those Formula 1 teams that rely on a bolide with a flatter angle of attack were hit harder by the rule changes in 2021 than others with a steeper “rake”. The first category also includes Sebastian Vettel’s new team, Aston Martin.

The Aston Martin is more flat than Red Bull & Co.

“The last time we drove in Bahrain was four months ago and we were on the podium before engine problems ended Checo’s race prematurely,” remembers team boss Otmar Szafnauer. “At the moment we will not be able to come anywhere near this performance.”

His explanation for the drop in performance: “This is a direct result of the new aero rules for 2021.” A comparison of qualifying times for 2020/21 clearly shows: Aston Martin lost 2.3 seconds. Only Haas had to leave more time.

“If you compare the qualifying times between the two races here, it seems that the cars with a steeper angle of attack have won around one second per lap compared to those with a lower angle of attack. Mercedes and we are hit the hardest. “

Partner team Mercedes also lost 2.1 seconds of lap time compared to the previous year. Technology experts also attribute the loss to the curtailment of aerodynamics in the area of ​​the underbody and diffuser, which caused cars with flatter rakes to set back more.

“After we have carefully analyzed the data from the tests and this weekend, it is clear that the new aero rules have harmed cars with a low-rake philosophy significantly more than others with a high-rake philosophy,” adds Szafnauer.

In particular, changes in the dimensions of the underbody and also in the rear of the car have had a “very negative effect” on the performance of low-profile cars, he notes. “Not only are we talking about the problem, Toto also talked about it yesterday.”

The Mercedes team boss also claims to have recognized a “pattern”. “Low-rake cars seem more [Abtrieb] to have lost as high-rake cars. But if we would just say that we were punished by the rules, if we weren’t racers and fighters, “he doesn’t want the disadvantage to be interpreted as an excuse.

The cuts in aerodynamics, especially on the underbody and diffuser, were originally decided so that the Pirelli tires would not have to cope with the enormous loads caused by downforce for a third year.

The reduction of the downforce should be around ten percent, half of which many teams would have won back at the start of the season, Pirelli boss Mario Isola was able to observe. Incidentally, after the Silverstone tire damage, the manufacturer decided in favor of new tires in 2021.

So were the aero rules mainly introduced to deliberately slow down some teams and create a more even field? “I’m just saying that the new aero rules have hit cars with a flatter angle of attack harder than cars with a steep incline,” says Szafnauer, evading the question.

“Mercedes and we suffer from it, whereas high-rake cars like Red Bull, AlphaTauri, McLaren and Ferrari were hit less hard.”

A look back: While Aston Martin, then still Racing Point, was third behind Mercedes and Red Bull in Bahrain 2020 (Sergio Perez on P5 in 1: 28.322 minutes), just a few months later the team is seventh in the balance of power. Lance Stroll fought for tenth place (1: 30.601 minutes) in qualifying on Saturday.

Sebastian Vettel, the newcomer to the team, was hit even harder. After a mixed appearance, slowed down by two yellow flags, the Heppenheimer had to get out immediately after Q1 – he was 3.7 seconds slower than Perez in the previous year: 18th place. For team boss Szafnauer this step backwards is difficult to accept.

Which of these aero tricks is the big hit?

He seems frustrated after the team experienced a surprisingly strong upswing last year and was even able to compete for pole positions and victories in some cases. With the entry of Aston Martin, the team hoped to be able to take the next step towards the top.

“We will of course work hard to make up as much of the performance deficit as possible in the coming races.” Even the world championship team Mercedes had to realize after the test drives and free practice sessions that they suffered from the rake philosophy.

Since this concept is part of the fundamental framework of every vehicle, one cannot expect quick solutions from Aston Martin and Mercedes in the short term, says Szafnauer. After all, the cars are subject to strict regulations.

“We can’t just switch to a high-rake philosophy, even if we wanted to, because the suspension on this year’s cars has already been homologated,” explains the team boss.

A merger is conceivable: RTL Germany and Gruner + Jahr are...

Ferrari calls for further review of the downsizing

Now even corona punishment for living together with partner – politics

Germany is closing its borders in the southeast: what you should...