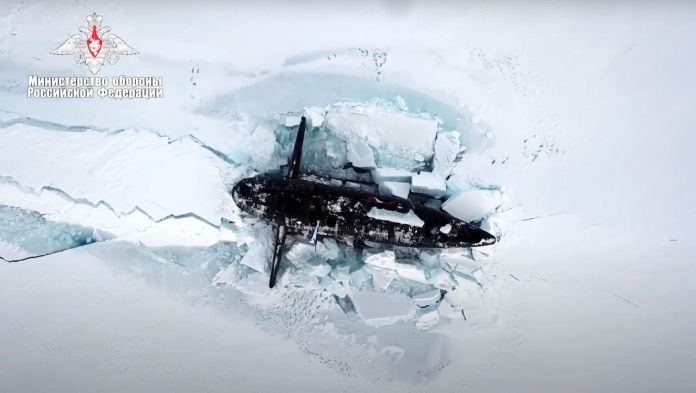 A white surface of ice stretches to the horizon, then suddenly three black outlines burst out of it: Russia has provided spectacular images with a military exercise in the Arctic. According to the Navy, three nuclear submarines broke through meter-thick ice at the same time.
As Supreme Commander Nikolai Yevmenov said at a meeting with Kremlin chief Vladimir Putin, it was the first time that the Russian Navy had succeeded in doing this.

A video published by the military showed how the submarines rose under the 1.5 meter thick ice at a distance of a few hundred meters, broke through it and the crew reported completion at the open hatch.

In addition to the submarine action, the martial clip also showed how armed soldiers drove around on snowmobiles.

According to the military, more than 600 military and civilian personnel took part in the exercise. The temperatures were up to minus 30 degrees. According to the Interfax agency, Putin instructed the navy to continue their expeditions in the Arctic in order to “ensure the security of Russia”.

Moscow wants to demonstrate its presence in the Arctic with the maneuver. In addition to Russia, a number of other neighboring states such as the USA also lay claim to parts of the region in which huge oil and gas reserves are suspected.

Will FIFA soon no longer be suitable for children? Strict...

“The dream date with Daniel was perfect!”