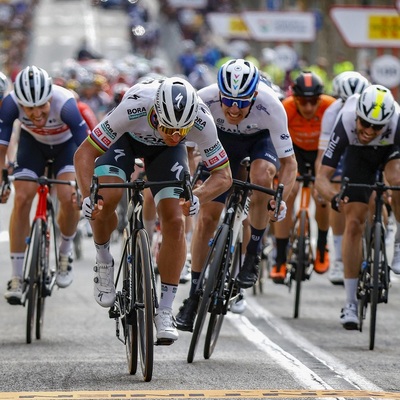 With a superior victory on the 6th stage of Catalonia

Peter Sagan (Bora – hansgrohe) sprints to his first win of the season on the 6th stage of the Tour of Catalonia. | Photo: Cor Vos

27.03.2021  | (rsn) – Peter Sagan let his team Bora – hansgrohe cheer on the tour of Catalonia for the second day in a row. The Slovak decided the 6th stage from Tarragona to Mataró after 194 kilometers in the sprint in front of Daryl Impey (Israel Start – Up Nation) and Juan Sebastian Molano (UAE Team Emirates) and followed suit with Lennard Kämna, who did the fifth section on Friday had decided for himself. Max Kanter (DSM) from Cottbus came in seventh as the best German professional. Adam Yates experienced a quiet day with his Ineos Grenadiers team and defended his top position in the classification without any problems before the final stage.

The mass sprint was not necessarily to be expected on a stage that was specified with an altitude of 2600 meters. Shortly after a five-man breakaway group broke away from the peloton, the sprinter teams joined forces. “We wanted to control the race today and worked hard right from the start. I have to thank the whole team for that, they really invested a lot. The final was very fast today, but I was ahead at the right time, ”said Sagan, who celebrated his first win of the season after recovering from corona.

Although the three-time world champion, who turned into the home straight in sixth position immediately behind Impey, had to change lines on the spur of the moment to avoid the South African, he prevailed with more than one wheel length.

“Of course I’m happy about the win. After Tirreno and Sanremo I hardly had a break, it was pretty tough. I’m a little tired now, but it’s a good start to the season, ”said Sagan, who flew to Spain, where the Tour of Catalonia started last Sunday, immediately after finishing fourth at Milan-Sanremo To get the necessary racing kilometers and a sense of achievement here for the upcoming classics. “It’s a nice win after the season didn’t start well for me. Now I finally have a win, which I came here for too, and I can keep looking forward, ”said Sagan.

Kämna convinces as a team player

The 31-year-old Slovakian owed his victory to a certain extent to Lennard Kämna (Bora – hansgrohe). Yesterday’s stage winner was the team player this time and almost single-handedly neutralized all attacks on the last hill and the subsequent descent.

“Congratulations to Peter and the whole team. It was a real team victory and a lot of work. We had respect for (Matej) Mohoric, so we went all-in from halfway through the stage. Even Wilco (Kelderman) put himself in the service of the team in the end, you don’t see that often. Peter rewarded this great performance with a clear victory. His timing was perfect today. Today we saw old Peter Sagan, ”said Christian Pömer, Sports Director at Bora – hansgrohe, happy about the second day win in a row.

There were no changes at the top of the overall standings. Yates continues to lead with 45 and 49 seconds respectively in front of his teammates Richie Porte and Geraint Thomas. Wilco Kelderman (Bora – hansgrohe / 1:03) remains fifth. Esteban Chaves (BikeExchange) defended the lead in the points and mountains classification. The best young professional remains Joao Almeida (Deceuninck – Quick Step).

After four kilometers, Harold Tejada (Astana – Premier Tech), Mattias Skelmose (Trek – Segafredo), Antoine Duchesne (Groupama – FDJ), Matej Mohoric (Bahrain – Victorious) and Dmitry Strakhov (Gazprom – RusVelo) left the field. Bora – hansgrohe, DSM and Euskaltel – Euskadi kept the group of the day on a short leash, so that the quintet could work out a maximum of 4:15 minutes ahead.

As a result, a game of patience developed on the wavy, in which the field tried to catch the ultimately hopeless outliers as late as possible. Strakhov launched a desperate attack 15 miles when the gap was only around 30 seconds. The Russian was able to defend his lead over the peloton for six kilometers before he too was put back before the last climb of the day.

James Knox (Deceuninck – Quick Step) used the almost three kilometer long mountain in the 3rd category with an average of 3.3 percent for an attack 15 kilometers from the target, which was quickly thwarted, mainly thanks to the attentive Kämna. Before the mountain classification, Elie Gesbert (Arkea – Samsic) pulled away for a short time.

On the descent, the Frenchman was literally overrun by his compatriot Remi Cavagna (Deceuninck – Quick Step). 8.6 kilometers from the finish, the sprinter teams also brought the French champions back with their combined forces. But Deceunick did not give up and sent Josef Cerny straight into the wind. But the Czech was also caught promptly.

No other driver dared venture into the wind in the last few kilometers. The preparation for the now inevitable sprint was chaotic, as no train could form. Like Max Kanter (DSM), Sagan went well placed on the last 500 meters, but, unlike the young German, was able to pull through on the slightly uphill finish passage – even though he had to leave his line. Still, he won by more than a length over Impey and Molano.

Soccer – Frankfurt am Main – criticism of the referee: Hoffenheim’s...

Google: Apple TV available on Chromecast and Android TV from 2021