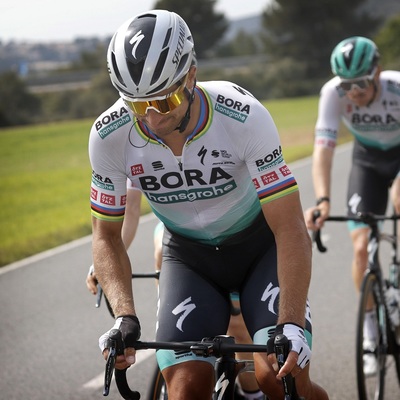 27.03.2021  | (rsn) – After his team-mate Lennard Kämna had won yesterday’s stage, Peter Sagan (Bora – hansgrohe) struck on the penultimate day of the Tour of Catalonia and took his first win of the season. The 31-year-old Slovak won the 6th stage over 193.8 kilometers from Tarragona to Mataro in a sprint on the uphill finish passage ahead of the South African Daryl Impey (Israel Start-Up Nation). Third place went to the Colombian Sebastian Molano (UAE Team Emirates). The best German driver was Max Kanter (DSM) from Cottbus in seventh place.

There were no changes at the top of the overall standings before the final stage. The Briton Adam Yates (Ineos Grenadiers) is 45 seconds ahead of his teammate Richie Porte and 49 seconds ahead of Geraint Thomas, who completes the Ineos podium. In fourth and fifth place, Alejandro Valverde (Movistar) and Wilco Kelderman (Bora – hansgrohe) follow at the same time, each 1:03 minutes behind.

Dortmund thanks to Haaland in the Champions League quarter-finals

The pill is becoming less popular as a contraceptive

Consoles and Google Stadia in comparison

Buy PS5: The status of availability at Media Markt and Saturn