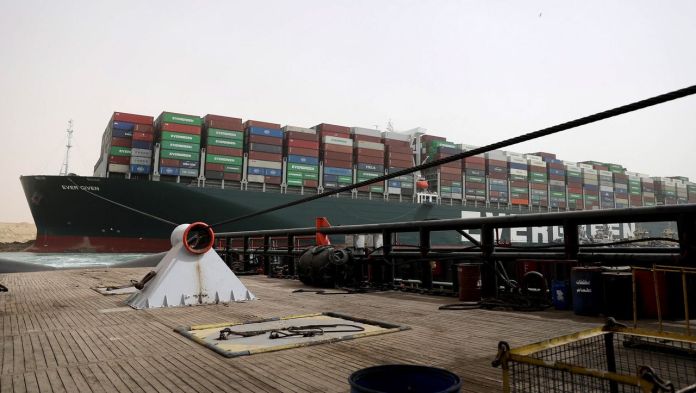 The Dutch salvage company Smit Salvage will possibly be able to get the container ship “Ever Given” stuck in the Suez Canal back on the road at the beginning of the week. It could take a little longer if containers have to be removed in order to reduce the weight of the gigantic ship, said the boss of the parent company of Smit Salvage, Peter Berdowski, on Dutch television on Friday evening.
“With our ships on site, the sediment already removed and the great flood that started on Sunday evening, we will hopefully be able to get the ship free again at the beginning of next week,” said Berdowski on a talk show. In addition, a crane is already being installed to remove hundreds of containers from the front deck.
The 400-meter-long and over 220,000-ton container ship went off course in a sandstorm on Tuesday and ran aground near the banks of the Suez Canal. Since then, it has blocked the waterway between the Red Sea and the Mediterranean Sea, and all ships in it cannot continue. Efforts by the Egyptian canal operator SCA have been in full swing since Wednesday to get the “Ever Given” free again. It is feared that the rescue work could drag on for weeks.

The SCA canal operator, on the other hand, said on Saturday lunchtime that a time when the ship would be released could not yet be named. After all, 9,000 tons of ballast water had been pumped out of the stranded “Ever Given”, and the rudder and propeller would work again. The stern of the stranded ship moved temporarily last night. A total of 14 tugs are in use. If it does not succeed in getting the ship to swim again, one can try to reduce the ship’s load.

The boss of the Japanese ship owner Shoei Kisen, Yukito Higaki, was more optimistic. At a press conference in Japan on Friday, he announced the goal of “liberating” the giant container by Saturday evening Japanese time. No water had run into the “Ever Given”, and there were no problems with the control or drive. “As soon as the ship moves again, it should be operational,” Higaki said, according to the Asahi Shimbun newspaper.

213 ships are stowed – with cargo worth billions

Another attempt to free the ship had previously failed. According to the Singapore-based company Bernhard Schulte Shipmanagement (BSM), who is responsible for the technical management of the container ship, two more tugs are expected in the Suez Canal on Sunday to help with the rescue.

Most recently, 213 ships with cargo worth billions of dollars have been stowed on both sides of the canal. German companies also fear delivery bottlenecks. Some major shipping companies such as Maersk and the German Hapag-Lloyd are already planning to switch to the much longer route via the Cape of Good Hope.

In the meantime, given the ongoing blockade, the US Army offered its support. Talks have already been held with the Egyptian authorities, said White House spokeswoman Jen Psaki on Friday. A team of experts from the US Navy could quickly be dispatched to the Suez Canal – a central task of the Central Command responsible for the Middle East is to protect the merchant ships in the region.

According to a representative of the US Department of Defense, the team of experts could set out from the US naval base in Bahrain on Saturday if Egypt made a formal request by then. In addition, the US Army could advise and support the workforce of ships that decided to detour around Africa because of the blockade of the canal and could encounter pirates.

Golf: Tiger Woods has an operation on his back – for...

Bitcoin market value has risen to over a trillion dollars

Dynamo strikers do their job: “Ice cold and absolutely uncompromising”