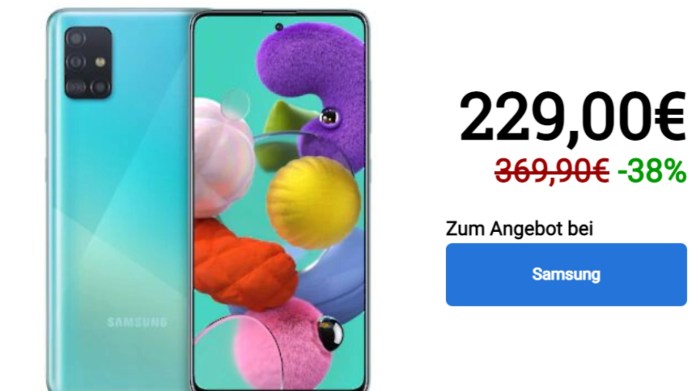 The Samsung Galaxy A51 is popular and getting cheaper. But is it still worth buying in 2021? Finally, a successor has appeared with the A52. We’ll tell you.

With the Galaxy A51, Samsung landed a real hit in 2020. The 400 euro smartphone was sold over 20 million times across the world. It is hardly surprising that the South Korean manufacturer is now launching a successor with the Samsung Galaxy A52. This is available now from 349 euros.

This brings movement to the price of the Samsung Galaxy A51, which was constant over the past few weeks at around 235 euros, but is now slowly falling.

Samsung currently only charges 229 euros for the cell phone. At the market launch almost a year ago, it still cost just under 370 euros. No retailer is currently offering the cell phone cheaper than Samsung. However, the Galaxy A51 was already a bit cheaper for Black Friday. So the offer is not a new best price.

To the offer at Samsung ›

Best price or not – is it still worth buying the Galaxy A51? We clearly mean yes! Although the aging Samsung phone has strong competition from brand new price-performance hits like the Poco X3 Pro or the Redmi Note 10 Pro, it offers some rather unusual features in this price range – such as the fingerprint sensor in the display.

In addition, Samsung guarantees you an update to Android 12 and 13 for the A51. You rarely find such a long-term update guarantee in this price range, which makes the phone particularly interesting for buyers who do not want to buy a new smartphone every year. So the A51 won’t soon be a thing of the past.

Since the differences between the Galaxy A51 and A52 are rather small, there is no reason to save on the newer model from our point of view.

In summary: The purchase of the Galaxy A51 is still worthwhile despite the release of the successor. Above all, the long update guarantee sets the Samsung phone apart from the competition. If you can wait a few more weeks, you should get it at an even cheaper price.

Samsung Galaxy A51 cheaper worth buying A52

That’s why Jessie J spent Christmas in the hospital