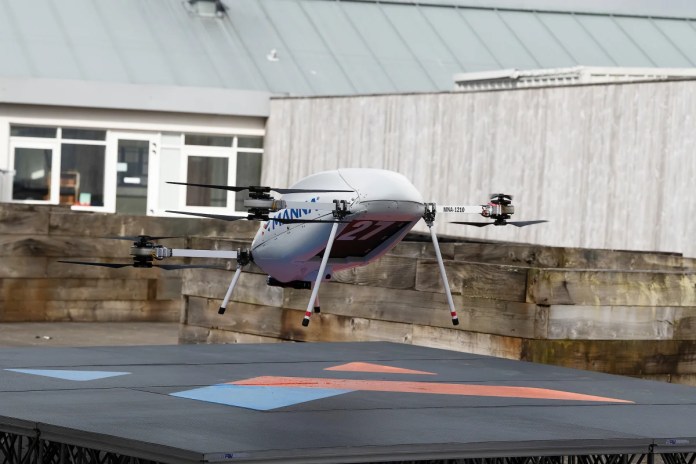 The entertainment electronics manufacturer Samsung wants to offer its customers in Ireland a delivery service by drone in order to deliver the latest devices of the Galaxy series without contact. To this end, Samsung is cooperating with Manna, a company that builds delivery drones. It should start with a pilot project in Oranmore. It is the first project of its kind for Samsung, reports the Irish TV broadcaster RTE.

According to Samsung’s plans, Galaxy devices that were purchased from Samsung’s Irish online shop will be shipped with a Manna drone in the future. In addition to the Galaxy S21 Ultra, this applies to the Galaxy Buds Pro, the Galaxy Tab S7, the Galaxy Watch and devices from the recently released Galaxy A series.

The pilot project will start in Oranmore, on the west coast of Ireland, according to RTE. As Samsung’s Ireland boss Eamonn Grant of the online area explains, Manna’s delivery drones are supposed to transport the devices at a speed of 60 km / h at an altitude of between 50 and 80 meters. This makes it possible to deliver deliveries to customers in Oranmore from the nearby dispatch center within three minutes. According to Manna, one of the pilot-controlled drones can make around 100 deliveries a day, each weighing around 4 kilograms.

However, the delivery service in Oranmore is not entirely new. Because the grocer Tesco in Oranmore has been offering the delivery of food by drone in the region since September 2020. Other local dealers have joined. In addition to food deliveries from restaurants, books and medication, for example, are delivered to customers around Oranmore by drone.

Eight dead from gunshots in three US massage studios – world...

AIT Worldwide Logistics acquires Fiege Forwarding, based in Europe, from the...