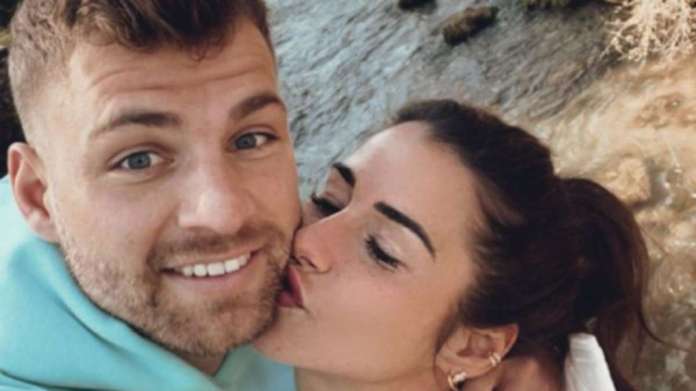 Sarah Lombardi has traveled to Munich. But the singer is annoyed in her Instagram story and is constantly grumbling.

Update from March 27th: Sarah and her companions, son Alessio and her fiancé Julian Büscher, had a long day. The young mother is in town to work. But she didn’t miss a long walk through the English Garden before her production date. Together with the son we went to the beautiful park. However, we don’t see Julian.

Then your appointment is due. “Off to production,” says Sarah, “I’m looking forward to it”. But their followers don’t get much more of it. After all, Sarah reveals what she’s turning. The music video for “Love is love”.

In the afternoon it’s done and Sarah can continue exploring Munich. Now your loved one is also visible. The Eisbach wave seems to interest Sarah once more. But it’s also impressive. She cheers a young woman who is incredibly confident on the board.

Then there are sweets. Ice cream for Alessio. A kiss for Julian. How freshly in love they look on the snapshot from Munich.

That was the end of the apparently wonderful day. But the three of them also did a lot. For Sarah, it’s still on the treadmill. And out of bed again early the next morning. By eight she and Alessio are up on their feet.

Little Alessio leads the way casually. With his hands in his pocket and the hood on his head, he walks through the hotel corridor. Mama is happy. She deposited the short video with “They see me rollin ‘” and Alessio shows his gangster poses. Where are they going this Saturday morning?

The grumbling from the previous day (see below) – apparently a thing of the past.

Sarah Lombardi checks into a Munich hotel and doesn’t stop complaining: “It can’t be”

Our text from March 26th: Munich – As a successful singer and influencer, Sarah Lombardi is not always in her hometown of Cologne, even in times of Corona. On Tuesday (March 24th) she was still on stage at the finale of “The Masked Singer” and handed the trophy over to the winner Sasha. But in the meantime, the 28-year-old has apparently traveled to Munich on business with friend Julian Büscher and son Alessio, as she shows in her Instagram story. However, when they arrived in their hotel room, the constant grumbling began.

Sarah Lombardi is in Munich – and doesn’t stop complaining

The reason for her bad mood is not the hotel room. She takes her followers on a little room tour and writes under her video: “We have arrived in Munich – a nice hotel and lots of space.” So far, so good. But her mood seems to be slowly but surely sinking into the cellar, because: “I’m just so hungry, but the two just hang in bed like two sloths,” she complains about her two husbands. “I’m so hungry and nobody wants to order me something to eat,” she continues.

A short time later, she contacts her community again. She still doesn’t seem to have progressed with the order. “So guys, I don’t think so, no. I’m just still sitting here and just waiting for it, ”she grumbles behind her cell phone camera while holding it on the menu of a delivery service. Apparently she’s had enough of waiting now and is taking matters into her own hands. “You just have to tell me what you want to eat and I’ll order,” she prompts Julian.

A story sequence later you can see an annoyed Sarah Lombardi hanging on the phone. She’s trying to finally place an order to satisfy her huge hunger. Visibly annoyed, she rolls her eyes. “Can’t be”, she writes with three desperate emojis under the Instagram video. Because apparently she has to spend more time and patience for this too. But what to do when your stomach growls? Lombardi seems to belong to the kind of person who is often “hangry”.

This is a play on words made up of the two English words hungry (to German hungry) and angry (to German angry): One speaks of this when a person is in a bad mood and is particularly irritable because he is hungry. That obviously applies to the singer. But the rescue seems to have arrived a short time later, because Lombardi reports one last time to give her fans an update: “So folks, I’m happy again, I finally got something to eat.”jbr)

This is how Sophia Thomalla and Co. mourn

A year ago: How the coronavirus came to Hamburg | ...

As the first municipality in Ticino – Ascona imposes mandatory outdoor...