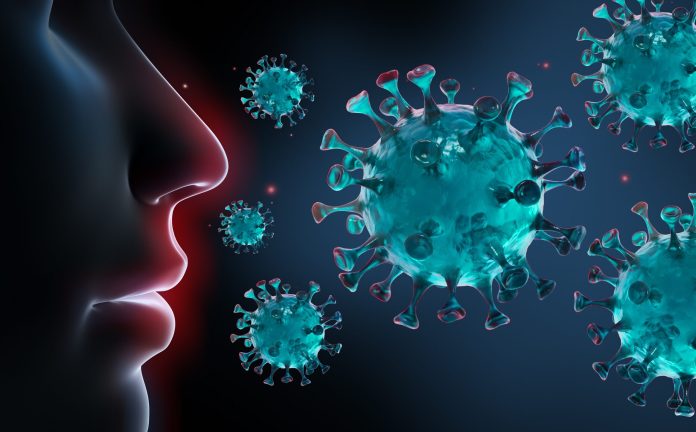 Has the role of the oral cavity in SARS-CoV-2 infections been underestimated?

An international research team found evidence that the novel coronavirus SARS-CoV-2 also infects cells in the oral cavity. According to the study, saliva in particular could play a greater role in the transmission of SARS-CoV-2 than previously assumed.

The research group, led by the National Institutes of Health (NIH) and the University of North Carolina, presented evidence that coronaviruses of the SARS-CoV-2 type can infect cells in the oral cavity. So far it has been assumed that the upper respiratory tract and the lungs are the primary sites of infection for SARS-CoV-2. The research results were recently published in the renowned journal “Nature Medicine”.

SARS-CoV-2 can affect cells in the mouth

It is known that SARS-CoV-2 affects the upper airways and the lungs. From there, the virus can spread to other areas of the body, such as the digestive system, blood vessels, and kidneys. In the new study, the scientists show that cells in the oral cavity can also be infected by SARS-CoV-2. Little attention has been paid to this region of the body so far.

According to the researchers, this could also explain various symptoms such as loss of taste, dry mouth and blistering that occur in some people with COVID-19. In addition, the results suggest the possibility that the mouth may play a role in transmitting SARS-CoV-2 to the lungs or digestive system through saliva, which is laden with viruses from infected oral cells.

A better understanding of the involvement of the mouth could provide new strategies for reducing virus transmission inside and outside the body, the working group emphasizes.

Saliva can contain many coronaviruses

Previous research has already shown that the saliva of people with COVID-19 can contain high levels of coronavirus. Saliva tests were almost as reliable as deep nasal swabs at diagnosis. So far, however, it has been unclear why saliva can contain so many SARS-CoV-2 viruses.

It was assumed that SARS-CoV-2 in saliva originates from nasal discharge or from coughed up lung sputum. According to research leader Blake M. Warner, this does not explain why viruses are found in the saliva of people who do not develop any respiratory symptoms at all. The research team suspected that the infected saliva came directly from infected tissues in the mouth, so they investigated.

Entry proteins for SARS-CoV-2 discovered in the oral cavity

The researchers analyzed the oral tissue of healthy people to identify areas of the mouth that are prone to SARS-CoV-2 infection. Susceptible cells contain RNA instructions for making entry proteins that the virus needs to enter the cells. The most important entry proteins for SARS-CoV-2 are the ACE2 receptor and the TMPRSS2 enzyme.

Both proteins were discovered in cells that line the oral cavity, as well as in cells of the salivary glands and gum cells. In some cells both proteins were even expressed, which indicates an increased susceptibility. “The expression levels of the entry proteins are similar to those in regions that are known to be prone to SARS-CoV-2 infection, such as the tissue that lines the nasal passages of the upper respiratory tract,” explains Warner.

SARS-CoV-2 can presumably replicate in the mouth

After the working group identified the potentially susceptible cells, the scientists looked for signs of infection in oral tissue samples from people with COVID-19. “In samples collected at the NIH from deceased COVID-19 patients, SARS-CoV-2 RNA was present in just over half of the salivary glands examined,” writes the research team. In a living patient with COVID-19, the researchers also found specific sequences of viral RNA that indicated that the cells were actively making new copies of the virus.

SARS-CoV-2 is likely to be transmitted via saliva

To determine whether the virus is infectious in saliva, the researchers exposed the saliva of eight people with asymptomatic COVID-19 healthy cells that were grown in the laboratory. The saliva of two of the test subjects caused an infection of the healthy cells, which shows the possibility that even people without symptoms could transmit infectious SARS-CoV-2 to others via the saliva.

Overall, the research team comes to the conclusion that the mouth, via infected oral cells, appears to play a greater role in SARS-CoV-2 infection than previously thought. “If infected saliva is swallowed or tiny particles of it are inhaled, SARS-CoV-2 could be transmitted further into the throat, lungs or even intestines,” sums up Kevin M. Byrd, the second head of the study.

“By revealing a possibly underestimated role of the oral cavity in SARS-CoV-2 infection, our study could open up new ways of investigation that lead to a better understanding of the course of the infection and disease,” adds Warner.

The working group suggests that further research is needed to verify the results in larger groups. The exact involvement of the mouth in the transmission of SARS-CoV-2 both inside and outside the body still needs to be analyzed in detail. (vb)

Important NOTE:
This article is for general guidance only and is not intended to be used for self-diagnosis or self-treatment. He can not substitute a visit at the doctor.

BVB shock: Defense star is out for a long time

Allianz report: “Risk of unrest will worsen due to Covid-19” Results in the ticker – votes and elections in the canton...