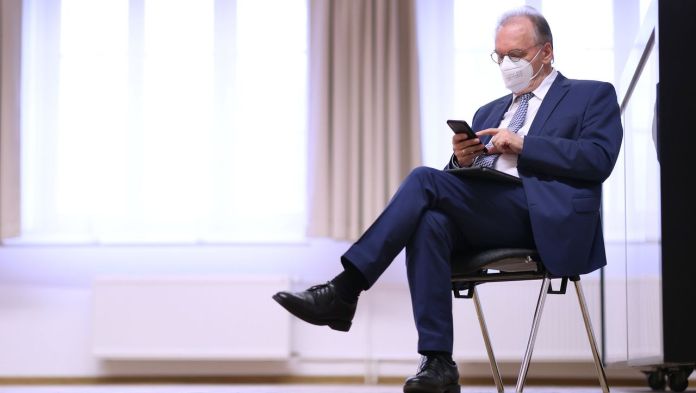 After Thuringia and Saxony, Saxony-Anhalt has the third highest seven-day incidence value in Germany with 173. Nevertheless, the state government wants to hold on to possible openings in individual projects, as the cabinet agreed on Tuesday. This involves opening two theaters where visitors are to be tested beforehand. There are also considerations for the timely opening of outdoor restaurants in isolated regions. The line ministers are currently working on possible projects that could be implemented as early as Tuesday next week.
The condition at the start of the projects is that a seven-day incidence of 200 in the district is not exceeded. Several counties are already revolving around this number. According to reports, there was an at times noisy argument in the cabinet meeting on Tuesday lunchtime.
The Greens had protested against the plans of Prime Minister Reiner Haseloff (CDU). In view of the increasing incidence, openings are a completely wrong signal, said Greensland boss Sebastian Striegel. One arouses false hopes among the population, because another hard lockdown is more likely. Many projects would not be able to start anyway, because it was to be expected that even more districts would exceed the 200 mark by the beginning of next week.

CDU and SPD want to stick to plans

Above all, State Chancellery Rainer Robra (CDU) and Economics Minister Armin Willingmann (SPD) opposed it, as reported. Striegel was accused of pursuing party political goals with his rejection. From the State Chancellery, in turn, it is said that Minister Claudia Dalbert (Greens) approved the ordinance with the “experimentation clause” for the projects last week without objection.

“Model projects are not opening projects,” Prime Minister Reiner Haseloff defended his approach at the press conference after the cabinet meeting. The individual projects are also limited to four weeks. In addition, they could even reduce the risk of infection because they would encourage more testing in the population.

Green chief Striegel confirmed his displeasure in the cabinet meeting with SPIEGEL. »The infection process does not tolerate any tactics or waiting. We now need consistent, reliable measures, ”said Striegel. “The cabinet did not make such decisions today.” The fact that the ministries are continuing to work on the approval of model projects sends “the wrong signal.”
He also advocates a possible adoption of the federal pandemic policy. »The third wave of this pandemic can only be broken through a consistent and coordinated approach. If necessary, appropriate resolutions must be passed in the German Bundestag. ”
Surprising: Haseloff himself also announced on Tuesday that the corona policy should be controlled from the Chancellery as far as possible. “I encouraged the Chancellor to do what she can do aggressively,” said the Prime Minister.

Experts fear the worsening of the corona situation in Great Britain

Germany vs. Spain: A Foray Through History | Free press

Skoda OCTAVIA nominated for ‘Car of the Year 2021’ award

Corona vaccination: allergies possible – for whom there may be a...

Basel fans set off fireworks in front of the stadium and...