During the pandemic, it is also largely quiet in the Bördelandhalle, otherwise known from the loud fans of the Bundesliga handball club SC Magdeburg. On Sunday afternoon, however, a loud scream filled the hall, which contained an immeasurable amount of suffering and despair. Gisli Kristjansson, backcourt player of the SCM, grabbed his left shoulder after an unfortunate landing after a duel, pain contorted his face.

Kristjansson’s scream in the game against the Füchse Berlin was not only due to the physical pain, one could guess, but also to a pronounced story of suffering. The Icelander is familiar with shoulder injuries despite being only 21 years old. Since 2019 he has been out because of three of them, the right side of the throwing hand was hit twice, and now the left joint for the second time. As the club announced on Monday, an MRI examination confirmed the initial fears: an operation is necessary, which will result in another longer break.

Foxes player Fabian Wiede was one of the first to give comfort and support. Kristjansson cried on the shoulder of the German national player, who is kind of a fellow sufferer. In January, Wiede decided not to attend the World Cup in Egypt because he had only just returned from a shoulder injury. “It was extremely bitter. I’m extremely sorry,” said the left-hander: “Every athlete is shocked because you don’t want anything like that, you think of people and only hope for the best for them.”

The injury in the 54th minute pushed the sovereign 29:24 (12:11) victory of Magdeburg against their rivals from Berlin into the background. The words of SCM trainer Bennet Wiegert, 39, on the Sky microphone then told of a great bond with his player. “He’s in terrible pain. The whole cabin aisle is full of screams. It tears my heart apart,” said Wiegert. The visibly agitated coach even questioned his ideas and ideas about handball: “I’m wondering whether the game philosophy, which I consider right and attractive for SC Magdeburg, is sometimes the right one in the Bundesliga.”

Magdeburg’s coach Wiegert calls for more protection for the players

Wiegert’s handball doesn’t care about conventions. The coach almost completely dispenses with classic backcourt shooters, which are tall and provide so-called simple goals. The Magdeburg team has only one two-meter man in their back, the Pole Piotr Chrapkowski (2.03). Instead, Wiegert prescribes fast handball, with many breakthroughs and numerous duels. His staff is accordingly nimble and tricky. For the spectators, this mixture sometimes results in spectacular handball. But that is risky: The fast Magdeburgers tend to lose out in collisions with larger and heavier defenders.

Wiegert is aware of this, and Kristjansson’s injury (1.91 meters) sharpened his protective instinct. Reflecting on his own game philosophy, he added a criticism of the line of the referee team: “When you have seen the World Cup in Egypt and what you see here, sometimes as a layman or handball fan you have the feeling that you are two different sports. “

At the World Cup, defenders were consistently given two-minute penalties if they attacked an attacker from the side – situations in which the fast Magdeburgers often find themselves on the offensive. In the Bundesliga and also in international club competitions, however, the interpretation of the rules is less strict. Wiegert appealed: “We would do well to protect our players in the Bundesliga.” Calls like this are well known in other sports when it comes to protecting players with special artistic abilities.

Wiegert’s contribution was colored by shock, but it could give food for thought, because the discrepancy between the interpretation of the rules at world and European championships and everyday play is a topic of discussion again and again. Even if Wiegert put his statements into perspective – conscious of his emotionality (“I have to be careful what I say now”). The fact that he couldn’t be happy about the win, that “it’s not the fault of the referee or the Füchse Berlin player, that seems to be part of our sport. I want to put the full focus on Gisli Kristjansson and give him maximum support”.

The Icelander was brought to the hospital by paramedics after the first treatment in the cabin. The Bördelandhalle was quiet again by then.

Trump Vice Mike Pence does not answer the phone even though...

No more Samsung updates: These Galaxy smartphones are threatened with the...

FFP2 mask requirement in public transport and retail is being examined

This app (does not) know whether you are wearing a mask...

An exit test is compulsory for the Tyrolean community of Elbigenalp 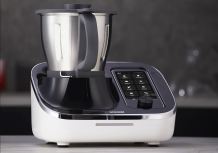 This is the Thermomix alternative at a budget price